Standard White - 100%
“Every trucker's been there: you've held down your air horn for ten minutes straight, and still the solar-powered eco-cart in front of you is sticking to the speed limit. Thanks to the Phantom, their reign of tyranny ends where your 20-foot, easy-wipe steel wedge begins. Let freedom ring.

Note, the production model of this vehicle has reduced reinforcement.

The Jobuilt Phantom Wedge is a modified semi-trailer truck featured in Grand Theft Auto Online as part of the Import/Export update.

The Phantom Wedge, as the name implies, is a modified version of the Phantom with a large, defensive metal wedge added to the front to ram vehicles. Its appearance appears to be heavily based on the Wedge Truck used by Adam Savage and Jamie Hyneman in their last episode of the popular show MythBusters, in the Grand Finale, where they used it to plow through all the props used in their long-lasting run.

The Phantom's hood has been removed in order to fit the massive structure that connects the wedge to the truck, composed of welded bars placed around the front and to the rear area of the vehicle. The front fenders are partially cut and the roof has two circular headlights, while the side access ladders on the rear section are wider. Unlike the regular Phantom, the Phantom Wedge can carry three additional passengers on the back if no trailers are attached to it, with two sitting on either side access ladder and one on the rear end, near the fifth wheel. Players in the rear section can also switch seats if there is an empty slot.

The Phantom appears with a rusty appearance and spawns with a single primary color for the cabin and the sleeper cab (which alternates between white and black in naturally-generated examples). It also retains the industrial wheel design from the regular Phantom.

The Phantom Wedge improves drastically over its regular counterpart, as it has better acceleration and top speed. The truck can be advantageous over the Ramp Buggy or the Armored Boxville, as not only can hit small vehicles with ease, but can depart other heavy vehicles with no problem. Its only downside is that the wedge makes the vehicle much longer than usual, being very tricky to navigate through alleyways, buildings other similar environments. Players in the rear section can switch seats when a slot is available, offering total coverage for defense with two-handed weapons (namely Carbine Rifles and Combat MGs), at the cost of being vulnerable to fall from the truck if it flips down or being hit by another vehicle.

Prior to the Arena War update, the Phantom Wedge could be damaged by ramming multiple cars, causing its engine to emit smoke from the sides. If the player was still ramming cars after said warning, the engine will stop working, disabling the Phantom Wedge. This issue was shared with the Ramp Buggy.

Instead of the traditional box-shaped engine, the Phantom Wedge utilizes a single-cam V8 engine. The badges are retained from the regular Phantom, stating it is a supercharged 24 valve engine (despite no supercharger being present). The vehicle's exposed engine means the visible timing belt functions, rotating the cams and crank, similar in fashion to the Fränken Stange and Tornado Rat Rod. It shares the same engine sound from the regular Phantom and many industrial trucks, only with a slight higher-revving tone due to the improved engine power.

A Phantom Wedge using the wedge to push another vehicle out of the way. 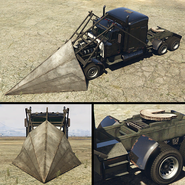 The Phantom Wedge on the updated Rockstar Games Social Club.

The Phantom Wedge in the cinematic preview on Rockstar Games Social Club.