Standard White - 100%
“If freedom had six wheels, a diesel engine and reinforced bodywork this is probably what it would look like.”
— Warstock Cache & Carry, MOC cab description.

The Jobuilt Phantom Custom is an armored semi-truck featured in Grand Theft Auto Online as part of the Gunrunning update.

The Phantom Custom is heavily based on the 1984 GMC General with an Aerodynamic Sleeper Cab, while the headlights have a small resemblance to those of the Western Star 4800. The fact it is one of the vehicles to carry the Mobile Operations Center seems to take inspirations from the F.L.A.G. Mobile Unit from Knight Rider.

The Phantom Custom is a customizable variant of the Phantom, which retains the general layout and most of the features from the regular version. However, the bumper has a different shape at the bottom and omits the red/white warning stripe, while the headlights are housed in front of the fenders rather than beside the grille area. The nose of the truck is more square shaped and the fenders have an angular design. The cabin area is mostly similar, but the mirrors are finished in black rather than in silver/chrome, and the roof features a different set of marker lights and dual trumpet horns on either side. The sleeper cab is also taller and more square shaped. The rear section is mostly similar, but the side access ladders are wider (similar to the Phantom Wedge) and the mudguards in front of the wheels are also angular in design, while the rear mudflaps no longer bear the cursive "Jobuilt" badges at the bottom. Like the Phantom Wedge, the Phantom Custom can carry three additional passengers on the back if no trailers are attached to it, with two sitting on either side access ladder and one on the rear end, near the fifth wheel. Players in the rear section can also switch seats if there is an empty slot.

Like the regular Phantom and the Phantom Wedge, the vehicle only has a primary color for the cabin and the sleeper cab, and also retains the same industrial wheels from the aforementioned trucks.

The Phantom Custom performs similarly to the Phantom Wedge, but having the same mass as the regular Phantom, resulting in a slightly better acceleration (which can be improved further with performance upgrades). The heavy mass gives the truck good traction on most surfaces, and is able to push most vehicles with no significant speed/torque loss. However, the brakes of the vehicle are somewhat lacking compared to other performance stats, requiring long distances before stopping the vehicle completely. When going on a downhill, the truck may take too much distance to stop, therefore it is advised to take great care when going downhill with the Mobile Operations Center attached.

Overall, it performs similarly to the Hauler Custom, but has limited steering capabilities in favour of mass and ramming power. Because of the open windows, the front occupants can make use of thrown weapons, such as Sticky Bombs and Proximity Mines. Players in the rear section can make use of two-handed weapons (namely Carbine Rifles and Combat MGs), at the cost of being vulnerable to fall from the truck if it flips down or being hit by another vehicle.

The Phantom Custom has, according to badges, a 24-valve Supercharged engine. Strangely, the engine model for the Phantom Custom appears to use 8 spark plugs textures, suggesting it is a petrol engine (untypical for a vehicle of this kind). It also suggests the engine can only be a petrol single-cam V8, but with a boxy appearance and connected to an adjacent air filter, with no sight of a supercharged as claimed. The engine sound is very different from other trucks, being a low-revving diesel engine also shared with the Hauler Custom.

As with the Hauler Custom, the vehicle is incredibly durable, able to take multiple explosions before being destroyed. The cabin also offers limited protection to the occupants thanks to its bullet-resistant windows, which can withstand up to 15 rounds from most firearms before being shattered. The truck also has a strong body, meaning it can withstand several collisions with virtually no deformation.

The Phantom Custom can take the following:

The Phantom Custom can only be modified at a bunker vehicle workshop, along with the Mobile Operations Center.

When purchased, the Phantom Custom comes painted in the following colors by default:

The Phantom Custom in a pre-release screenshot.

The Phantom Custom on the updated Rockstar Games Social Club.

The Phantom Custom in the cinematic preview on Rockstar Games Social Club. 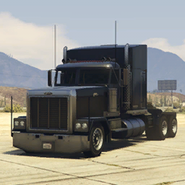 The Phantom Custom inside a Bunker.