Peyote Plants are a collectible in Grand Theft Auto Online, added as part of the continuation of the The Diamond Casino & Resort update, released on October 31, 2019, during the Halloween Surprise 2019 event.

As of November 14, 2019, Peyote Plants no longer appeared in the game; however, they were made available again on April 6, for one week.

"Keep an eye out for peyote plants that have appeared across Los Santos and Blaine County."
―In-game message

There are 76 peyote plants scattered throughout the state of San Andreas, located either on land or in the ocean. They work almost identically to the Peyote Plants in GTA V, however, they spawn at different locations. Unlike Playing Cards and Action Figures, these respawn after roughly 24 in-game hours and there is no final reward given to the player for collecting them all.

The plants can also be eaten while in passive mode. This way, the player cannot hurt anyone while playing as an animal, nor can they be harmed themselves.

If one is playing with a controller, it will start vibrating once they are near a peyote plant. When consumed, the player starts hallucinating and will pass out, after which they will spawn as a random animal. The selection of animals the player has a chance to spawn as is dictated by where the plant is located – on land or in the ocean. The following is a list of which animals the player can be transformed into:

There are also two special animals the player can turn into. The peyote plant in the backyard of Clinton Residence transforms the player into Chop. In Grapeseed, at the base of Mount Chiliad, there is a plant that will transform the player into Bigfoot if consumed between 03:00 and 08:00 and while the weather is foggy. Bigfoot has super strength and increased health, and it can swim and use weapons, but cannot drive or enter buildings. The police will also ignore the player.

The player can end the hallucination at any time, after which they will spawn at the nearest hospital and be awarded 5,000 RP. The event also ends if the player dies or goes into water.

Note: Images for locations 58 and 61-76 do not show the actual plants, as they were removed from the game on November 14. 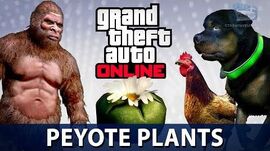 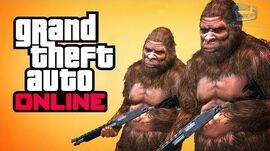 Retrieved from "https://gta.fandom.com/wiki/Peyote_Plants_in_GTA_Online?oldid=1223998"
Community content is available under CC-BY-SA unless otherwise noted.