Standard White - 100%
“Back in the 50's, drag racing was a more straightforward affair. You took a beautiful post-war convertible, gave it a serious engine upgrade and a nosebleed stance, and took it onto the streets. Sure, the weight transfer didn't count for much when the front end picked up more air resistance than an open parachute, and the survival rate over 150mph was pretty low. But that's the price you pay for historical accuracy.”
— Southern San Andreas Super Autos description.

The Vapid Peyote Gasser is a modified muscle car featured in Grand Theft Auto Online as part of the continuation of The Diamond Casino & Resort update, released on November 28, 2019, during the Peyote Gasser Week event.

The vehicle is the drag car variant of the Peyote, and thus it shares most of the bodywork and features from its standard version. It also takes inspirations from the Bird of Prey, a 1955 Ford Thunderbird gasser.

Notable changes on the vehicle are the removal of the front bumper and part of the lower side, giving room for the front-mounted oil tank. The front suspension setup was completely rearranged, being a steel axle beam supported by a pair of springs, in a higher height. The grille itself is highly detailed and exposes part of the engine bay and a protective cage around it. The rear wheel arches were cut in order to fit the large drag tires.

Other minor features were changed as well: the original "V10 Supercharged" badge on the sides were removed, and the original black trimming is absent on this model. While the interior remains identical to that of the standard model, it receives a race-type steering wheel. The vehicle may spawn with a stock carbon roof, a painted (primary or secondary) hard top, or no roof, as well as with or without the hood, although all these options can be changed in any vehicle mod shop.

The primary color os the car is applied on the body and engine cam covers, while the secondary color is applied on the frames around the engine. Although not accessible, the trim color is available for the custom seats installed with the "Roll Cage" modifications, which are set to black in purchased examples. It uses a set of plain rims with a detail on the center.

The Peyote Gasser has decent speed, excellent acceleration and fair braking, making it great for speeding in a straight line; however, the vehicle suffers from understeer at higher speeds, making turning quite difficult, thus good brake and speed control is a necessity to be able to turn correctly. Because of the higher ground clearance, the Peyote Gasser can travel through uneven terrain and small obstacles easier than its standard counterpart.

The Peyote Gasser has one (the eleventh) Advanced Flag enabled.[1] The purpose of this flag is unknown, but it appears to have little impact on performance.

The Peyote Gasser is powered by a single-cam V8 engine, coupled to a 5-speed gearbox in a front-engine, rear-wheel drive-layout. The engine sound is the same as the Tornado Rat Rod, which derives from the Trophy Truck, and the engine start-up is the same as the Fränken Stange.

The Peyote Gasser with no roof. (Rear quarter view) 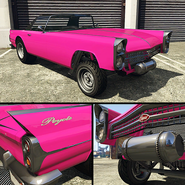 The Peyote Gasser on the updated Rockstar Games Social Club.

The Peyote Gasser in the cinematic preview on Rockstar Games Social Club. 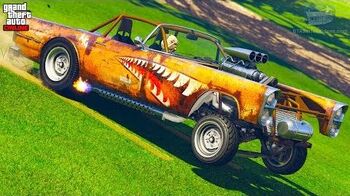