Wasted
Busted
Ray gets away
Ray is spooked

Flatline
To Live and Die in Alderney
Weekend at Florian's

In-game time
“I gotta shut somebody up and show people I mean business!”
— Jimmy Pegorino

Ray Boccino sends a text message to Niko, telling him that Jimmy wants to meet them at his house.

Niko must go to Jimmy's house, where Jimmy will be speaking to Phil Bell and Ray. Jimmy explains that he fears someone is undermining the Pegorino's operation and that there might be rats within the organization. Ray tries to convince Jimmy that Phil is not trustworthy. After both Ray and Phil leave, Jimmy will tell Niko that he has to shut someone up, but has not decided who it will be. After the meet, Niko should expect a call from Jimmy.

After a game hour, Jimmy will call Niko and ask him to kill Ray. Ray and his bodyguards will be located on Cod Row in East Holland. When the player reaches the destination, Jimmy will call again. Jimmy will tell Niko that Ray is heading to a chop shop in BOABO and should be killed before he gets there. He will also inform Niko that he will call Ray to have him and his guards stop for gas on the way, so Niko will have an opportunity to kill him and his protection. A car will be required to follow Ray.

Ray's Oracle (colour usually changes from black to white or grey) and a black PMP 600 can be seen parked outside of the place where Ray is before entering the yellow marker. These are the cars that Ray and his guards will use, so Patrick McReary may be called and asked for a bomb to plant on either car before beginning the pursuit. However, if the cars are damaged before Ray gets out of the building, he will be spooked and the mission will be failed.

Ray and his guards will stop at the Terroil gas station on the corner of Albany Avenue and Topaz Street. If the player detonates the bomb at this point, the destruction of the gas station will create an explosive chain reaction may cause both cars to explode. If the PMP 600 is destroyed, the Oracle in which Ray is will try to escape; if the Oracle is destroyed, the guards in the PMP 600 will attack Niko. Once everyone has been killed, the mission will be passed and Niko will call Jimmy to tell him Ray is dead.

If Jon Gravelli's missions have been done, then finishing this mission will also trigger a phone call from United Liberty Paper that will start the mission That Special Someone, leading to the end of the game. 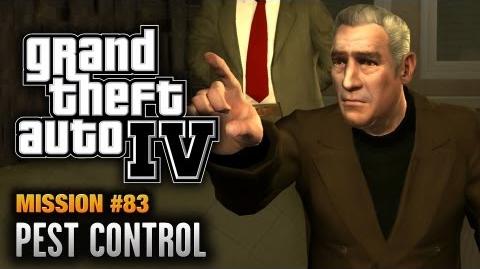