The business has two stores in Los Santos, located on Bay City Avenue in Vespucci Canals and at the corner of Hawick Avenue and Laguna Place in Hawick.

Period Rags sells vintage female clothing. Its presentation is generally simple but tidy, with neatly organised women's clothing as seen from the window of the store in Vespucci Canals. The stores are inaccessible to the player.

The name of the business has a typically crude double meaning, both referring to the vintage used clothing stock as well as a method of using fabric rags as sanitary napkins by menstruating women, up until the late 19th century. 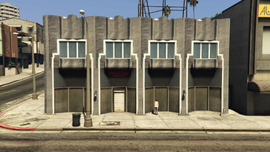 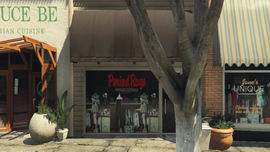 Store window showcasing various dresses as well as casuals for females.
Add a photo to this gallery
Retrieved from "https://gta.fandom.com/wiki/Period_Rags?oldid=1143345"
Community content is available under CC-BY-SA unless otherwise noted.