In Grand Theft Auto III, Grand Theft Auto: Vice City, and Grand Theft Auto: San Andreas, the car´s design resembles a slightly modified and smaller 1962-69 Nova Chevrolet Chevy II Wagon with a simpler side panel design, taller tail lights and a different grille, but it mostly resembles 1970-86 Jeep Grand Wagoneer or a Fiat 1100 R Familiare and the grille for GTA Vice City was resembling Peugeot 504 wagon. The GTA Vice City and GTA San Andreas renditions of the Perennial come in two variations: with or without roof rack. While the GTA Vice City rendition features only solid body colours, the GTA San Andreas rendition commonly features a two tone colour scheme, but sometimes it comes with a totally dark blue paintjob. The roof colour cannot be changed at TransFender but visiting Pay 'n' Spray changes it. The GTA San Andreas's Perennial has chromed side moldings in its upper body and apart from its tail lights, it looks more like its real-life counterpart when compared to the GTA III or GTA Vice City renditions of the vehicle.

In Grand Theft Auto: Liberty City Stories and Grand Theft Auto Vice City Stories, the car assumes a slightly newer and leaner model that resembles a Oldsmobile Vista Cruiser, based on the position of the side panels and grille, but retains elements of previous iterations of the car in the rear. The rendition of the car in these games also features two tone body colors and in GTA VCS, it can come with few one-color paintjobs. The Hearse from GTA LCS resembles the Perennial.

In Grand Theft Auto IV, the Perennial has been drastically changed, and is now based on the second generation Honda Stream. The model is mainly based on Honda models, mainly the Stream and with details like windows from the 2007-2011 Honda CR-V and the Honda Stream. The rear of the sides and rear window are also similar to those Mercedes-Benz R-Class and Audi A4 B8 Avant. It's the only vehicle in GTA IV which has fully glassed roof, which is very reminiscent of the ill-fated Renault Avantime. The taillights loosely resembles that of a 2006 - Present Toyota Previa. Instead of fog lights, the Perennial sports daytime running lights, where the lights are always on regardless of time of day similar to those of second generation Acura MDX. The interior seating is part leather and part cloth, just like the Honda CRV. The Perennial is equipped with a GPS system with a female voice (male voice for the FlyUS variant), but only if the player leaves the "selected cars" (default) option in the audio menu.

The Grand Theft Auto: Chinatown Wars Nintendo DS rendition appears to resemble a K platform Station wagon. while the PSP and iOS versions the Perennial is more modern and resembles a Mitsubishi Space Wagon, with some styling cues from the GTA IV rendition. 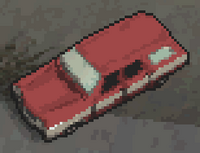 Retrieved from "https://gta.fandom.com/wiki/Perennial?oldid=1007573"
Community content is available under CC-BY-SA unless otherwise noted.