Standard White - 100%
“Here at Maibatsu, we get it. In these trying times, it can be really hard to commit to a color scheme for your classic, mid-noughties racecar. So we're working in partnership with LS Customs to provide a livery for anything life can throw at you. Bad hair day? There's a livery for that. Stuck upside down in your rhinestone gravity boots? There's a livery for that. Dad screaming you were a mistake long into the night again? You guessed it. The Penumbra FF. Adding yet more color to an already colorful existence.”
— Southern San Andreas Super Autos description.

The Maibatsu Penumbra FF is a sports car featured in Grand Theft Auto Online as part of the Los Santos Summer Special update.

The Penumbra FF is based primarily on the second-generation Mitsubishi Eclipse, while the front bumper taken from the Honda Integra DC2 Type R. Its headlights were either inspired by the 1995 Dodge Avenger Coupe or the Nissan Skyline R33, while the taillights are seemingly based on the first-generation Mitsubishi Eclipse and Toyota MR2 W20; the tail light bar may be inspired by the one found on some Geo Storm models. While its name may hint a front engine, front wheel drive layout like the standard Eclipse, the car is actually a front engine, all wheel drive layout, making it similar to the GSX trim level available for the first two generations of the Eclipse.

The vehicle assumes the same layout and shape from the Penumbra but inherits a classic design, where the front end features a central grille with a horizontal line on it, followed by two small square intakes on the edges. Above the bumper, a set of square lamps and turn signals can be seen, located in silver/chrome housings. The manufacturer emblem can be seen on the centre. The side denotes a simplistic layout, featuring large skirts separated by thin ridges. On the cabin area, plastic trim can be seen around the windows, with coloured mirrors on the A-pillars. The rear of the car is distinguished by the red strip displaying its name in silver lettering, along with other badges on the curved upper area. Both the strip and the tail lamps are surrounded by a plastic fitting. The bumper is relatively flat and has two mouldings for the exhausts, yet it only has a driver-side dual square exhaust by default. The interior of the car reuses the same dial and textures from the Banshee.

The primary colour of the car is applied to the body and engine cover, while the secondary colour is applied on the interior stitching and the engine cam cover (the driver-side portion of the same). A trim colour is also available for the portions around the small dials and instruments located in the central panel. Although normally coloured black and not accessible outside of Content Creator, the dials support a separate colour, and one of the sets assign a yellow colour for both the trim and the dials. Its wheels bear the same rim design as the "Ice Kid" sport wheels available in Los Santos Customs, wrapped in low-profile tyres.

The car is powered by a transversely-laid Inline-4 engine, coupled to a 5-speed gearbox in an F4 layout, again stated by the badges to be a 2.6 liter turbocharged engine, like the Penumbra. The engine sound is shared from cars like the Kuruma and the Kuruma (Armored). 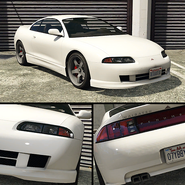 The Penumbra FF in the cinematic preview on Rockstar Games Social Club.