Yes
“High performance compact car for the kind of person who drifts around corners with a baby seat in the back. Recently discontinued, so may be worth waiting a decade or so for it to become ironic cool.”
— Southern San Andreas Super Autos description

The design of the car is clearly based on the North American styling of the 2012 Mitsubishi Eclipse. The front bumper and grille design comes from the first generation Scion tC while the headlights are similar to those found on the 2013-2016 Dodge Dart. The tail lights closely resembles the ones from the 2006-2014 Audi TT.

The Penumbra is distinguished by its simplistic and aerodynamic profile typical from sport coupés. The lower area of the front face is predominated by the lower grille spanning abouth one third of the car around the centre, while slightly inset sections are seen leading towards triangle-shaped intakes, intended to direct air to flow to the front brakes of the car. On the upper area, there is the upper grille bearing the manufacturer emblem on the centre, while the outer edges are occupied by chrome/silver housings with circular units and smaller turn signals, in an almost diagonal positioning. The license plate is mounted over the central section of the bumper and the bonnet is very simplistic in shape.

The sides of the car feature the common Japanese geometric styling and the flared front quarter area is where a long, straight body line begins at about half the car's height, parallel to the bottom edge of the side windows. The greenhouse area features polymer trimmings around the windows and B pillars, along with body-coloured mirror wings. The car's roof is outlined by a very smooth curve that runs into the third box section of the body quite smoothly, while the lower edge of the rear windscreen is completely curved.

The rear face of the car features a sharp curved edge at the top which spans almost the entire width of the car's body. Beneath this, there is an horizontal brake light strip, which is as wide as the license plate. The manufacturer emblem is located centrally, just beneath the strip. Either side of the strip, at the edges of the body there are chrome-backed rear light units. The rear lights feature three straight edges and then a curved edge which makes the unit decrease in height towards the edges of the car's body. The units are split into four main sections, two inset on the chrome area and then two beneath. Below the lights, the central body area is impressed with its top edge being in line with the lower edge of the rear light units and its outer edges in line with the rear light's inner edges. A license plate is mounted centrally on the impressed area. A sharp line signifies a different facet of the rear bumper. Most of the lower area is covered by a polymer insert with curved outer edges. This area houses twin-rectangle exhaust tips, close to either edge and a central duct. At half the height of the lower bumper insert area there are horizontal lines signifying secondary pieces of the bumper at its base.

The car originally featured black "Maibatsu" lettering on the lower part of the rear bumper, but it was removed in the After Hours update, presumably to avoid conflicting with the new livery modifications it received in the same update.

The interior of the car is the same one from the Feltzer and the Bullet, with the only difference being the maunfacturer emblem placed over the horn cap.

The primary colour of the car is applied on the bodywork and the interior stitching, while the secondary colour is applied on the lower portions of the car, the central section of the front bumper, the mirrors, the handles and the roof panel. The wheels appear to be identical to the "Uzer" sport rims available in Los Santos Customs.

Despite what its marketing tagline claims, the performance of the Penumbra is only just above average in comparison to various cars of its class. Its top speed is satisfactory, similar to the Sentinel, and with modifications it can rise to the likes of the Fusilade; a significant improvement. Acceleration, however, is lacking. This might be because of its cumbersome appearance and heavy frame, which may also contribute to its rather weak brakes. Handling is the ace in the Penumbra's hand, being snappy and responsive at just about any speed. Overall, the car's base stats start decent and with the right Los Santos Customs modifications, can get great.

The car is powered by what looks like a V8 that sends power to the wheels in a front engine, rear wheel drive layout (contrasting with the FF layout of the Eclipse GT and SE), and claimed to be a 2.6L Turbo engine. The engine sound is rather powerful, which is reused from cars like the Jackal and the modern Police Cruiser.

As of the After Hours update for Grand Theft Auto Online, the Penumbra received livery modifications, not available in story mode.

The Penumbra first seen early in a screenshot. 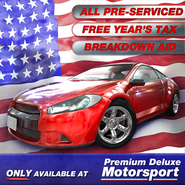 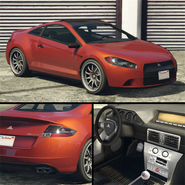 The Penumbra on the updated Rockstar Games Social Club.

The Penumbra in the cinematic preview on GTA V Rockstar Games Social Club.

The Penumbra in the cinematic preview on GTA Online Rockstar Games Social Club.

Hao's orange Penumbra has many modifications applied, such as upgraded bumpers, exhaust, lights, hood, roof, skirts, spoiler, turbo tuning, and modified rims. The vehicle's doors are locked to the player, and its headlights are permanently on. This variant is not seen in traffic.

This specific variant can be replicated in-game, but is otherwise never seen in this form outside of this mission. It also sports a unique pearl not available at Los Santos Customs.

To obtain it, simply:

Hao's Penumbra could be seen later in the LS Car Meet in GTA Online, this time with the "Hard Parking" livery exclusive to online, custom wheels and the unique license plate, "60HSW264". 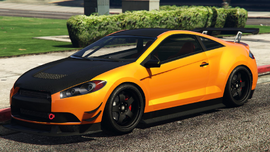 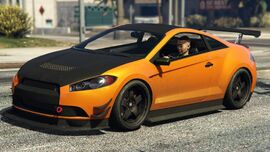 As seen in the mission. 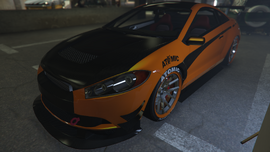