View source
watch 02:56
Raise a Floppa - The Loop
Do you like this video?
Play Sound
For the mission in the first Grand Theft Auto, see Heist Almighty - Penetrator.

Standard White - 100%
“A sexbomb of a supercar that will do your commute in thirty seconds flat, turning heads and twitching pants all along the way. Remember, both hands on the wheel.”
— Career Builder description.
“Close your eyes. Cast your mind back to your early teens. You're lying in bed, hand gyrating at incredible speed under the covers, your eyes fixed on the torchlit centerfolds pinned to the back of your wardrobe. That sumptuous body, those exquisite curves, that billowing rear exhaust. Now open your eyes. Your hand is still in your pants, but the dream is real. Finish the job.”
— Legendary Motorsport description.

The Penetrator is a sports car that appears in two versions. The Liberty City variant is simply the Porka with its roof up, while the San Andreas/Vice City variant is based on a Porsche 911.

The vehicle appears to be heavily based on the Jaguar XJ220 with additional design influences from the Vector M12, seen in the overall curvature of the beltline and rear window design, as well as appearing to feature the rear lights from the Lamborghini Diablo VT and a rear grille similar to the one found in the Bugatti EB 110. The front bumper appears to be based on the one found in the Chevrolet Corvette Indy concept car. Unlike its real-life counterpart, the Penetrator does not feature flip-down headlights. Due to this, the front fascia seems to be based on the Jaguar XJ220S TWR, a track tuned version of the XJ220.

The Penetrator is depicted as a sports car with a long body and a seemingly rounded profile, featuring a front bumper with a lower lip/extender and mesh intakes above it, the central one being much wider than the side ones. The upper area features a set of circular headlamps behind glass casings, as well as a front boot that hinges from the front and has an impressed area on the centre.

On the sides, the car has triangular formations leading to a set of small intakes intended to vent the engine bay, along with character lines on the skirting area that bevome more prominent as they approach to the rear wheels. On the greenhouse area, the car has black trims around the windows, black B-pillars and black lines separating the roof panel from the rest of the car, while a set of mirror wings extend to the outer sides of the car, having a black support base over the front fenders and near the A-pillars. On the area behind the cabin, the rear window's panel is not fully connected to the roof, leaving a small gap between them. It is tilted about 5 degrees throughout the entirety of the rear window frame. By default, it features a small spoiler, located just over an impressed area of the rearmost section.

The rear of the car consists of a black vented panel on the centre and circular tail lamps on the edges, the outer ones split in half for the outer turn signals and the inner reverse lights. The rear bumper holds a license plate on the centre, two rounded exhaust tips on the edges that are finished in chrome and a black vented diffuser on the centre, which spans about two-thirds of the car's width and also covers most of the bottom side on the rear overhang.

The interior of the car reuses the same dials and textures from cars like the Tailgater and the Schafter, obviously altered to fit into the two-door layout, in a similar manner to the Schwartzer.

The car is only painted in a primary colour, which also affects the interior stitching. The wheels have a unique rim design based on the 1996 Vector M12, consisting of three wide spokes over a plain centre and a turbine-like surrounding, wrapped in low-profile tyres.

The Penetrator has a much higher speed than other supercars in-game, making it a much worthy competitor for races with its all-around handling and excellent speed and acceleration. Despite the long profile, the car has relatively good maneuverability, possibly due to the position of the front wheels and the steering range. Care should be taken, however, as it appears to have some oversteer when entering corners quickly and can sometimes lead to it powersliding. This happens often if performing a 90-degree turn at high speeds and turning sharply.

The Penetrator is powered by a single cam V12 engine equipped with 12 throttle bodies, coupled to a 5-speed gearbox in a mid-engine, all wheel drive layout (30% front, 70% rear distribution). The engine sound is shared with cars like the Bifta and the Kuruma.

Second version of the Penetrator in Grand Theft Auto.

A custom orange Penetrator shown in an office garage, used in the promotional artwork, note the unused roof scoop and black stock rims.

Seen in an official screenshot. 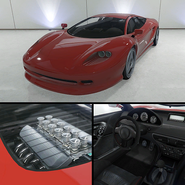 The Penetrator on Legendary Motorsport.

The Penetrator on the updated Rockstar Games Social Club.

The Penetrator in a Cinematic preview on Rockstar Games Social Club