The company seems to be known for their exaggeratedly large wrist watches.

The company can be seen advertising "BigTime" watches in various locations around the state. Although their store is inaccessible to the player, the player can see the watches on display in the windows.

The male GTA Online Protagonist can buy watches of the brand from any clothing store in Grand Theft Auto Online, while organizations can also store and sell looted Pendulus watches. Also in GTA Online, the player can apply a Pendulus livery to the Nero Custom.

Above the east entrance on the Rockford Hills store, there is a clock with French writing around it; "plus ça change plus ç'est la même chose" which translates as "what goes around comes around".

The company appears to be most likely be based on Tissot due to the similar logos and colour schemes, while the watch designs are reminiscent of Tissot and TAG Heuer wrist watches.

The name Pendulus is a Latin word that translates roughly to "hanging", and a derivative of the English word "pendulous". The two "u" letters in the logo have two dots on them, which could represent nipples on two hanging breasts, an example of Rockstar Games sexual humor.

They share a building with TSLC and Tim Vapid and it is a replica of the main building at 9501 - 9519 Wilshire Boulevard which anchors Two Rodeo (aka Via Rodeo), where there is a Buccellati watch and jewelry store. 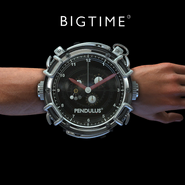 Pendulus watch on display behind the windows of the Rockford Hills store. 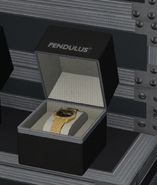 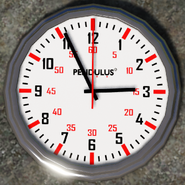 A Nero Custom with a Pendulus livery.
Add a photo to this gallery
Retrieved from "https://gta.fandom.com/wiki/Pendulus?oldid=1207179"
Community content is available under CC-BY-SA unless otherwise noted.