GTA Wiki
Register
Don't have an account?
Sign In
Advertisement
in: Pages with unsourced statements, Articles with sections under construction, New articles,
and 4 more

Payphone Hit: The Judge is a mission featured in Grand Theft Auto Online as one of the Payphone Hits in The Contract update. It is a Free Mode job that can be conducted in any session type by answering a ringing payphone either randomly encountered or requested by calling Franklin Clinton.

“Man, this should be a wholesome-ass day of work. The target is some backwards-ass judge that change the sentences for anyone who offers her a fur coat, or a stack of fuckin' cash. She put a lot of innocent people in jail. Some fuckin' people I even know.
And tomorrow, she's ruling in a big fraud case against one of our partners at Lombank. The whole world know he guilty as fuck, so a whole bunch of our clients are out there betting against Lombank stock. Only I just got wind the lady judge been paid to throw the fuckin' case out. And if the defendant walks, and the stock don't tank, our clients stand to lose a lot of fuckin' money. So, I say we bring some karma to this evil-ass bitch, take her out, and our clients'll give us a nice kickback when justice takes its course.
So look, she's at the golf course now, playing a round to celebrate in advance. Your outfit should still be at the club house. I suggest you go pay her ass a visit.”
— Franklin's payphone description

The target is at Los Santos Golf Club teeing off with a playing partner and two security guards. One will be on foot and is armed with a Pistol, and the other one will be driving the target's Caddy and will equip an SMG on foot. The security guards are not mandatory for the assassination bonus, so players can opt to deal with them with any other method before going for the target, except in the case of the remote bomb as the judge is likely to be alerted while doing so.

Similar to On Course, the player must first enter the clubhouse, after which they will spawn in the golf course randomly dressed in one of the unlocked golf outfits and armed with a golf club. The player will be dressed at random even if they were already wearing one of the outfits.

After receiving the target location, Franklin sends a text message spelling out the Bonus criteria. All scenarios involve Golf.

Collect the golfing equipment and run over the target with a golf buggy.

Players enter the Clubhouse and come out in their golf outfit from On Course and will be armed with a Golf Club. The target is nearby and there are parked Caddies in the lot. The player just needs to take one and run her over. It may take a couple of hits or a high-speed impact to kill her.

Collect the golfing equipment and take out the target using a Remote Bomb on the first/third/sixth hole.

Players enter the Clubhouse and come out in their golf outfit from On Course and will be armed with a Golf Club. The target is nearby and there is a stashed backpack with a Remote Bomb.

Search nearby for the stashed remote bomb.

The equipment stashed nearby can be collected to help complete the Assassination Bonus.

The player needs to plant it at the specified hole before the target tees off, then wait for the target to approach the hole and detonate it using their Mobile Phone. The player should ensure that they position themselves so that the flag is pointed away from them, otherwise, it will obstruct the player model from interacting with the hole. If the target is already nearing the hole or she becomes aware that her security has been attacked, she will be alerted and the bonus condition is voided.

Trigger the remote bomb by calling the Detonate Bomb contact on your phone.

Collect the golfing equipment and take out the target with a golf club.

Players enter the Clubhouse and come out in their golf outfit from On Course and will be armed with a Golf Club. The target will be at the back of the course on the tee of any of the possible holes (first or sixth) and the player just needs to melee her with the club, fight off the security guards and leave the area.

The security guards will need to be evaded or killed. The guards will give chase on foot and in a Caddy and one will be armed. Multiple waves of security reinforcements will arrive and chase the player in Froggers. 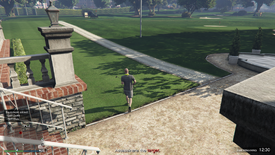 Getting set for the bonus. 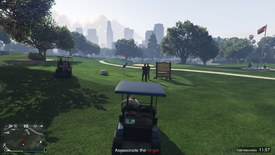 The judge teeing off at the 3rd hole. 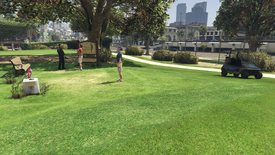 Teeing off at the 6th hole. 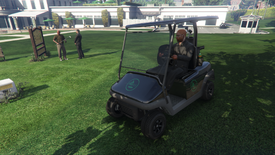 Her playing partner and "security" 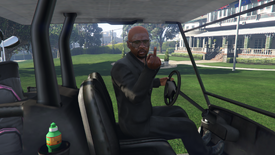 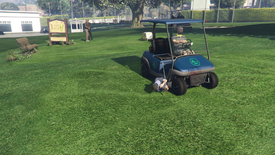 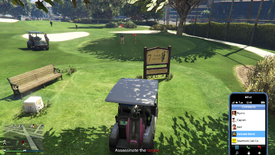 Calling in the remote bomb detonation. 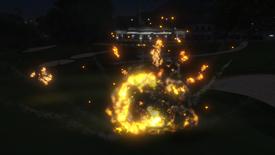 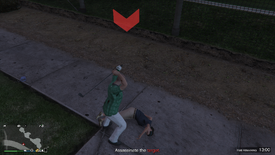 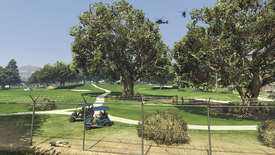 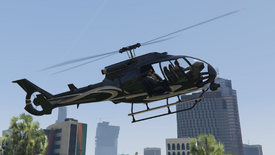 Security forces in a Frogger.