Payphone Hit: The CEO is a mission featured in Grand Theft Auto Online as one of the Payphone Hits in The Contract update. It is a Free Mode job that can be conducted in any session type by answering a ringing payphone either randomly encountered or requested by calling Franklin Clinton.

“You ever heard of the show called Closet CEO? Where some asshole billionaire pretends to be one of his broke-ass employees for a day or two. Well, keep thinking about that, and then think about the CEO of Gold Coast Development. This dude is a world-class asshole... union bustin', poor working conditions, corruption, intimidation, man, you name it... and check this out... now he about to throw on some overalls and play nice for the workers on his site for the cameras.
Now, full disclosure: I did some work a while ago that gave this asshole's market value a boost. But that was before I heard what a piece of shit this fucker really is. So, when a client came to me with a proposal to make some bills off liquidating his ass, man, I said hell yeah.
Our client goin' short the fuck out of the Gold Coast Development stock... then we goin' ice this fool while he's playing at construction worker for this dumbass show. The stock tanks, our client gets rich, we get paid.
And if we make it look like he died because of some unsafe conditions on his site? Makes it even better.”
— Franklin's payphone description

The target is at a construction site filming a reality TV show called Closet CEO. Franklin refers back to the events of The Construction Assassination when Lester had him kill Enzo Bonelli to this CEO's benefit when the Gold Coast Development stock price rose. Only he now knows that this target was just as bad as Bonelli, so has no qualms taking him out in the same way.

After receiving the target location, Franklin sends a text message spelling out the Bonus criteria. All scenarios involve creating an industrial accident.

“There's a lot of old machinery at that site - a lot of it hanging pretty close to people, if you catch my drift. Accidents happen, especially when there's heavy containers involved and a weapon stashed nearby. If you connect the dots, there's a bonus in it for you”
— Franklin's TXT for the "shipping container" bonus.
“The target's a smoker. He should know better - construction site is a dangerous place to light shit up. If you wanna make out with a little more cash, just one suppressed shot in the right place should make it look like a real bad accident. There's a weapon stashed over there, if you need it.”
— Franklin's TXT for the "gas tank explosion" bonus.
“Client's in the mood for an industrial accident. Maybe if you shoot the right guy at the right time, the target will have a run-in with a bulldozer? Don't worry about the driver - these dudes are bodyguards in fancy dress anyway. Weapon is stashed nearby.”
— Franklin's TXT for the "bulldozer" bonus.
The equipment stashed nearby can be collected to help complete the Assassination Bonus.

If the red area is approached, the target will be alerted to the player's presence and will endlessly chase them in an attempt to shoot them.

Use a scoped rifle to take out the target with a cargo container.

A stashed backpack is nearby on a vantage point to enable the player to snipe a shipping container being held aloft by a Dock Handler to cause it to drop on the CEO and kill him. The CEO will be wandering around the site and the player needs to wait until he walks beneath the container to shoot the marker to cause it to drop. If it misses the target, no-one on site is spooked and the CEO can then just be killed.

Use a scoped rifle to take out the target with a gas tank explosion.

A stashed backpack is nearby on a vantage point to enable the player to snipe a gas tank to cause it to explode while the CEO is nearby, killing him. The CEO will be wandering around the site and the player needs to wait until he stops near the gas tank and shoot it, causing the explosion.

Use a scoped rifle to take out the target with a bulldozer.

A stashed backpack is nearby on a vantage point to enable the player to snipe a bodyguard dressed as a construction worker who is driving a Dozer near the target, causing the out of control bulldozer to run over the target. 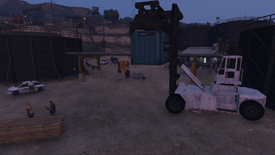 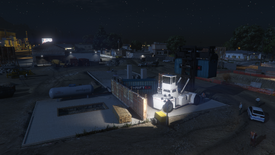 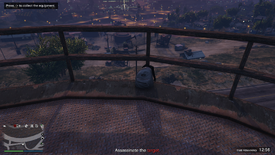 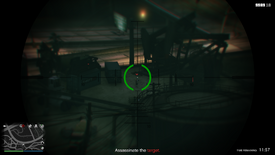 Target and the Dock Handler marker nearby. 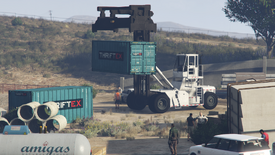 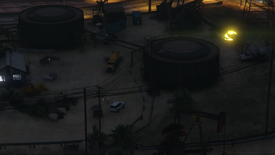 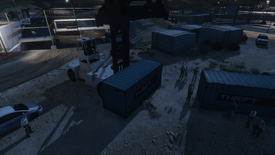 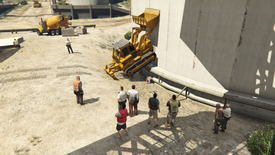 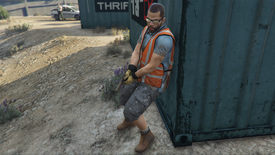 After missing, he will fight back with a Pistol. 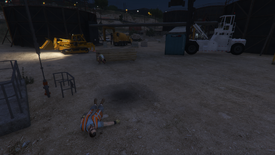