View source
watch 02:46
The Quarry - The Loop
Do you like this video?
Play Sound
For other missions featured in Grand Theft Auto Advance and Grand Theft Auto: Chinatown Wars, see Payback.

Wasted
Busted
Pavanos get away

In-game time
“The way they look at us, we're bottom feeders! Always have been. We ain't a real family to them - just a bunch of Guernsey goombas!”
— Jimmy Pegorino, about the Pavanos

Payback is a mission in Grand Theft Auto IV, given to protagonist Niko Bellic by Jimmy Pegorino from his house in Westdyke, Alderney.

Following the disastrous attempt by Pegorino to appease the Pavanos and The Commission with a tribute, Pegorino wishes to exert his revenge on the Pavanos. Having learnt the Pavanos are due to make a cash pickup in Alderney soon, he wants the player to "hit them hard", interrupting the pickup and killing all the Pavanos in the vicinity.

The first half of the mission will require the player to chase a pair of Pavano goons in a black Coquette, who will predictably head to the pickup regardless. The player must drive to the diner on Mueri Street in Acter, and stop in the yellow marker. A cutscene then ensues, showing the Pavanos' goons named recognize that Niko is representing the Pegorinos, so they attempt to lose him on the way to the meet when driving a black Coquette.

Niko then chases the Pavanos through the various streets and alleyways and follows them to the meet. The chase ends at the Auto Eroticar showroom in Alderney City. Niko then wipes out the Pavanos using any means necessary.

During the shoot-out, the police soon join in. Niko finishes off the Pavanos and then loses his wanted level to complete the mission.

"There has been yet another mass shooting in Alderney. Again it involved members of the Pavano Crime Family and again the National Office of Security Enforcement is calling it an act of terror. Whether this is an act against AutoEroticar, the retailer where the shooting took place, or the mobsters who were slaughtered, N.O.O.S.E would not say. However, they have stated that several suspects have been airlifted from Liberty City to an offshore questioning centre. These massacres have changed the spirit of Alderney forever. No more will that patch of land on the other side of the West River be associated with good working-class values, polluted swamps, spray-on tans, big hair, violent racist masculinity and other American-as-apple-pie attitudes of the suburbs. Maybe it's time to think about blocking the Booth Tunnel once and for all."

"The Liberty City metropolitan area continues to be the main target for pathetic terrorists in their war on freedom. They struck the American-owned AutoEroticar Showroom in West Alderney City, massacring everyone in sight. This comes soon after the recent slaughter of US citizens in the Acter Industrial Park by terrorists. Some reporters have decided to dig into the past of the victims of these massacres to suggest that they were somehow related to organized crime."

"It's disgusting. These people are American heroes. They have involutarily given their lives for all of our freedom; what right do we have to dig into their past and make accusations and muddy the reputations of the dead? If N.O.O.S.E tells us these were acts of terrorism, then that's what they were. It's un-American of us to question that. N.O.S.S.E has said that a number of suspects have been extracted to offshore questioning centers. All I can say is thank god for that constitutional loophole." 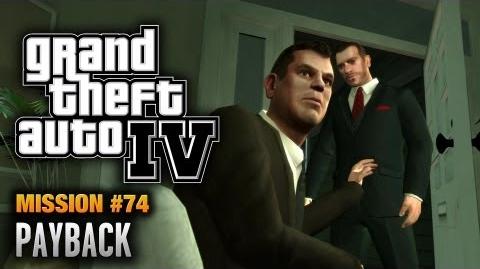