Brandon Beilis[9]
“Allow me to introduce myself. I am Pavel. Helmsman first class, also chief engineer, gunner... radar technician and cook, huh.”
— Pavel introducing himself to the player.

“I was about to get involved in some serious geopolitical bullshit... but who wants to get stuck on the bottom of the ocean... with three IAA agents and... angry blogger?”
— Pavel

Pavel is a Russian sailor working on the Kosatka submarine, which had been modified and converted to allow it to be operated by a crew of one; as such, he is responsible for almost every role onboard, from engineering, maintenance, and gunnery to being the ship's cook.

Prior to working with the player, Pavel was a Russian Navy sailor, having made several friends within the Navy and other branches of the Russian military. It is unknown when Pavel left the Navy for the criminal underworld, but it may have been in his late 20s, and it supposedly occurred after a discussion with his former captain. Pavel was active in Russia's post-Soviet era of the 1990s, but is unable to recall his activities as that time was "a hell of a drug."

After Pavel left the Navy, he had been running jobs for the Madrazo Cartel using the Kosatka, and was about to work with the IAA. He was making easy money (presumably smuggling) on the Brazil to West Africa trans-Atlantic route. Before that, he claims to have faked a sailing accident for the Governor of Liberty State, visited the North Pole, liberated sensitive documents for the Canadian government, worked with an unnamed American private military company on an operation that affected him to the point that he "swore [he] would never leave [his] submarine again", abducted the CEO of Lombank on a cruise ship near Cayo Perico,[10] and spent a summer in a torture cage after trifling with the Welsh.[11]

“I will be lurking in the deep like post-Soviet kraken... telling you what to do on the radio.”
— Pavel explaining his role in the heist.

In late 2020, Miguel Madrazo contacts the protagonist and enlists them to purchase the submarine in order to plan The Cayo Perico Heist.

Pavel is first seen when the player enters the Kosatka. Climbing down from the sail hatch, Pavel is heard in the distance singing "The Song of the Volga Boatmen" while working near the Sparrow storage pad in the Moon Pool. Warning the Protagonist to not touch anything just as they're peering at some meters, he guides them towards his voice. He will introduce the player to the Kosatka's primary features and explain the plans and preparations formulated by Miguel Madrazo. He also explains some of his background and prior jobs while touring the player before returning to his duties elsewhere on the Kosatka.

Once the player initiates the scouting phase of the Cayo Perico Heist, Pavel will give instruction and conversation to the player through radio communications.

After arriving to the island and sneaking past El Rubio's guards, he will relay the basic key locations the player must find, and take pictures of, in order to progress. Using satellite imaging and camera footage, Pavel will inspect and explain possible points of interests as well as various routes and items that may be of value to the player. He will also talk about miscellaneous locations such as the graveyard if the player takes pictures of them.

Pavel will continue to give important information, details as well as additional dialogue throughout the heist prep and finale.

“My God... They just keep getting younger and dumber.”
— Pavel on Miguel Madrazo

When the finale begins for the Cayo Perico Heist, Pavel is frustrated from the nuances between screens and buttons before he begins to brief the player but is interrupted by the arrival of Miguel Madrazo who came to remind the player of their objective to steal the files. Miguel proceeds to give a sort of pep talk and tries to cheer for the player/s, only to turn the conversation into awkward silence before leaving for the Music Locker. Pavel and the player is astonished at Miguel's conduct before he sends the player off to the heist.

He is not seen in the ending cutscene for the Cayo Perico Heist but continues to happily work for the player and continues to support them as they continue to do more heists at Juan Strickler's compound.

While Pavel doesn't physically appear in The Contract update, he is briefly mentioned by Franklin Clinton at F. Clinton and Partner. Despite swearing that "he would never leave the Kosatka submarine again", he visits Franklin and GTA Online Protagonist's Agency (offscreen) in 2021.

Franklin claims he went through his office saying he knows the GTA Online Protagonist, talking about "caviars and submarines" and asking when the protagonist is going to take "another trip to the Caribbean", confirming they are still occassionally robbing El Rubio's Compound to this date.

Much of Pavel's dialog is quite 'meta' and sometimes borders on breaking the fourth wall. 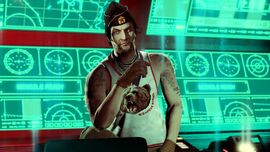 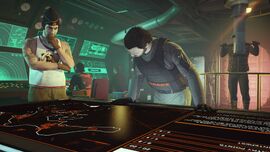