Paul "Paulie" Sindacco, is a character in the Grand Theft Auto series that appears as a main character and the secondary antagonist in Grand Theft Auto: Liberty City Stories. Paulie was the Don of the Sindacco Family, that also owned Caligula's Palace and Paulie's Revue Bar until his death.

A relative of his, Johnny Sindacco, died of a shock-induced heart attack in Grand Theft Auto: San Andreas in 1992 after coming face-to-face with Carl Johnson who previously did grievous harm to him.

Before the start of the game, the Sindacco family, under Paulie, had began using their funds from their ruling operation in Las Venturas to start making moves to take over territory from the other families in Liberty, particularly turf belonging to the Forelli Family, which had been losing power since Sonny Forelli was killed in 1986.

Paulie is constantly going back and forth from Liberty City to Las Venturas, leaving the day-to-day operations of the crime family to his capos, who are strictly kept in line by Paulie himself. This constant displacement of his makes him a rarely seen presence in Liberty, which earned him the nickname of "The Invisible Don".

Worried about the increasing power of the Sindaccos, Salvatore Leone makes contact with Joseph Daniel O'Toole; one of Paulie's biggest pimps, who operates the Paulie's Revue Bar in the Red Light District and offers him a position of higher power within his family, thus convincing O'Toole to turn against the Sindaccos.

Using JD as an informant, Leone enforcer Toni Cipriani begins to actively sabotage the Sindacco family, severely dampening their efforts to take power. In response, Paulie orders his men to kidnap and assassinate Salvatore, failing due to the last minute intervention of Cipriani. A furious Salvatore retaliates by raiding and taking over the Revue Bar and the Red Light District, thus eliminating almost all Sindacco operations in Portland.

After losing Portland, Paulie turns most of his efforts towards displacing the Forellis, choosing to back away from the Leones temporarily.

“This car's trying to kill me!”

— Paulie, after Toni takes control of his car

Incentivated by the Sicilian Mafia, the Sindaccos go to war with the Forellis, succeeding in taking a lot of their territory in Staunton Island. However, after Salvatore Leone is forced to go into hiding due to a warrant issued by Mayor Roger C. Hole, Paulie decides to try and strike a peace with Franco Forelli so that both their families could team up against the weakened Leones.

Salvatore caught wind of this arrangement and instructed Toni Cipriani to sabotage the peace talks by taking control of Paulie's car with special gear and use it to murder the Forelli high-rankers at the meeting, thus ruining the possibility of an alliance between the families.

Having caught wind of Salvatore and Toni's role in sabotaging the peace talks, Paulie pulls strings with the new mayor, Miles O'Donovan, to have Salvatore arrested, giving up his location so that the police can catch him. Once Salvatore discovers this, he orders Toni to assassinate Paulie. Cipriani finds the Sindacco don as he is about to leave for Las Venturas on his boat and, though Paulie tries to escape, Toni manages to catch him and kill him.

After Paulie's death, the Sindaccos were left leaderless and disorganized, prompting them to permanently relocate all their operations to Las Venturas. Paulie was buried in the Liberty City Cemetery. His tombstone has the epitaph "Viva Las Venturas, Baby" engraved on it. 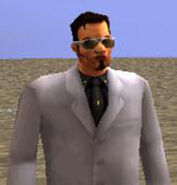 Paulie without his sunglasses.