DJ Paul in a pre-release screenshot of The Ballad of Gay Tony.

The Lost and Damned (voice)
The Ballad of Gay Tony

Himself
Paul Martin is a character in Grand Theft Auto: The Ballad of Gay Tony who appears as a radio DJ and a minor character.

DJ Paul is a British DJ of Vladivostok FM who played live at the Bahama Mamas LC nightclub in Liberty City. He was one of the witnesses amongst the many club-goers to Luis Lopez's shootout with the security and murder of Vic Manzano.

His in-game appearance is variable, as he can appear as a muscular guido, with spikey hair and jewelry, or a guy with a tracksuit. Perhaps he has additional appearances. 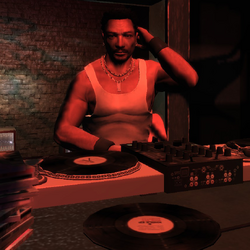 One of his appearnaces, as a guido. 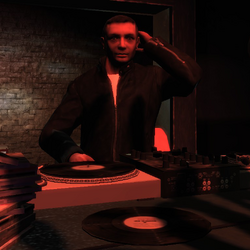 Another variation of his appearance, regular guy with a tracksuit.