While superficially appearing nothing like a criminal organization, GTA Vice City describes members of the PIG as a "gang", as evidenced by game's stats, where the PIGs can be declared the player's "least favorite gang" if the player kills more PIG members than those from other gangs. The stats also dubs members of the PIG as the "security guards".

The PIGs appear many times throughout the story of Grand Theft Auto: Vice City. They provide protection for Congressman Alex Shrub and the band Love Fist, and have links to the Vice City Triads, providing protection for their illegal counterfeiting operation. At one point the PIGs attempt to move in on Tommy Vercetti's protection rackets in Ocean Beach; Tommy wipes out the guards involved and destroys their office.

In Grand Theft Auto: Vice City Stories, there are two different versions of PIG guards; one is Caucasian and the other is African-American.

Unlike conventional gangs, PIGs do not congregate or move in groups, but rather patrol the streets individually. PIGs are usually not hostile to the player, and will only attack in self-defense. PIG members will also attack the player with a pistol if they fire a weapon, regardless of whether it was aimed at them or not.

In Grand Theft Auto: Vice City, PIGs patrolling Starfish Island may attack or be attacked by the Vercetti Family if they enter the grounds of Tommy's mansion. Likewise, North Point Mall PIGs are frequently in conflict with the Sharks; police act against both parties when gun battles occur. In addition, policemen will pursue and kill PIG members in the same manner as they do with gang members and street criminals, allowing the player to attain "Good Citizen Bonuses" worth $50 each for an attack delivered to a fleeing PIG member. 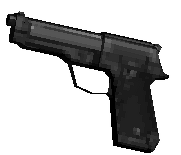 A PIG guard chasing a felon.

A PIG guard in the mission Demolition Man. 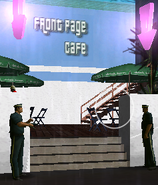 Two PIG guards outside the Front Page Café in the mission Bar Brawl. 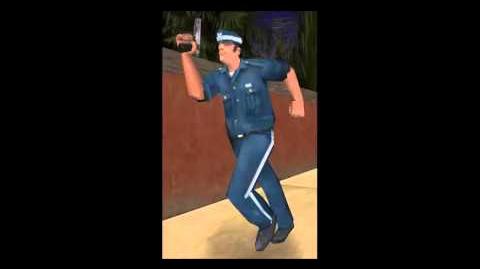