Standard White - 100%
“The international symbol of self-importance, Mammoth's Patriot Mil-Spec might be lacking standard safety features, but who cares about blind spots when the only person you don't want to hit is sitting in the driver's seat? Install exclusive modifications at the Agency Workshop.”
— Southern San Andreas Super Autos description.

The Mammoth Patriot Mil-Spec is a four-door offroad SUV featured in Grand Theft Auto Online as part of the continuation of The Contract update, released on December 30, 2021, during the Patriot Mil-Spec Week event.

As a variant of the Squaddie, the Patriot Mil-Spec is primarily based on the Hummer H1, and bears a strong resemblance to the Mil-Spec Automotive's customized H1 series, evidenced by its side-view mirrors, the bolt-on black panels on its side doors and tailgate, as well as the unique interior design.

The vehicle assumes a very similar design to the Squaddie and shares most of the options from the aforementioned vehicle, featuring a bumper that is similar to the "Black Low Profile w/ Winch" bumper option, as well as a wide guard that spans the whole width of the truck and which derives from the aforementioned vehicle. Its front end and grille are mostly identical to the Squaddie (albeit with a flat lower edge), while the "Mammoth" badge can be seen just above the grille. The hood retains most of the features from the aforementioned vehicle, though lacking the details near the windshield and having a shorter, block-shaped air intake snorkel on the right. Similar to the Squaddie, this front section hinges from the front and opens to reveal the engine bay, revealing a small air filter and the intercooler that is almost in a horizontal position and is placed in front of the engine.

The sides of the truck have a mostly unique design, lacking the flared profile seen on the Squaddie and its beta model, as well as the Patriot and its derivatives, in conjunction with a long antenna on the driver-side front fender. The bottom of the vehicle has black borders with a set of side steps that resemble the "Rhino Side Steps" options from the Squaddie, while the doors have central plates, dual hinges and large handles finished in black (which can be replaced with armored doors resembling the "Heavy Armored Doors" options from the Squaddie). There are also black rectangular mirrors mounted on the doors, which resemble the "Black Modern Mirrors" option from the Squaddie (while the stock mirrors of the aforementioned vehicle can be found under the same name on this vehicle). The cabin assumes a similar shape to the Squaddie but is a bit shorter in height and has rounded edges on the sides, while being larger to accomodate four occupants. The rear section of the vehicle is occupied by a small bed with flat durbar portions on the sides and amber lights on the rearmost sides, along with a small exhaust pipe on the rearmost left side and the fuel cap on the rear right fender.

The rear end of the truck is mostly identical to the Squaddie, featuring a large tailgate in the center that bears a black plate, as well as a bumper that is similar to the "Black Heavy Plated Bumper" option for the Squaddie (though adding a license plate on the driver side). The tail lights are the same ones from the Squaddie and the Winky, but the inner brake lights are not split in half.

The interior of the vehicle is unique, being an ample interior with a mostly gray leather finish and a dial set derived from the Squaddie, arranged in a way that the main dials are on the right of the driver side and the smaller gauges located above the steering wheel. There are numerous aircon units across the dashboard, while the central area is occupied by a bulky section with switches, aircons and a display in the center. Between the central section and the driver side, there is a narrower section that contains a small radio display (difficult to see in first-person), additional switches and the corresponding gear stick.

The primary color of the vehicle is applied to the bodywork, the engine cam covers and most of the interior, while the secondary color is applied to the roof. It uses a unique set of rims, consisting of eight circular holes and a protruding center with bolt details. The portion around the center can also support a dedicated wheel color, appearing to give a tint/shade on it (though only naturally-generated examples may have one). The spare wheel's rim from the "Roll Cage w/ Spare Wheel" modification also receives the wheel color from the corresponding option.

The vehicle performs quite similarly to the Patriot, having a lower top speed and acceleration than the Squaddie. It also has rather sluggish handling due to its relatively heavy mass, but can withstand several collisions without noticeable deformation. While it remains weak to push other vehicles, it has a tendency to drive over them when the stock bumper is retained, also being ideal for off-roading like the Squaddie. The snorkel on the hood provides good tolerance in deep water, though not as much as the Squaddie.

The vehicle is powered by a single-cam V8 engine, coupled to a 4-speed gearbox in a front-engine, all-wheel-drive layout (40–60, front to rear torque distribution). It shares the same engine sound as the Squaddie.

Installing any "Tailgate" modification will increase its traction slightly, in the same way as a spoiler.

The Patriot Mil-Spec, along with selected vehicles from the same update, can be modified with a Remote Control Unit, which allows to drive the vehicle remotely, similar to the RC Bandito and the Invade and Persuade Tank. Note that the camera is always set to first-person view, and cannot be kept if the Missile Lock-on Jammer is installed.

When the Heavy Plated Doors upgrade is equipped, the vehicle adds armor plating on the doors and windows, in a similar manner to the armor paddings of selected vehicles of the same update and the vehicles featured in the Executives and Other Criminals update. However, it gives a much higher resistance to explosives in general. It also has bullet-resistant windows, which are able to withstand 15 rounds from most firearms before being shattered. The Hardtop options are solid and can block bullets from most firearms, ideal for evading enemy pursuers.

The Patriot Mil-Spec, along with selected vehicles from the same update, can be modified with a Missile Lock-on Jammer, which prevents the lock-on system of the Homing Launcher and other weaponized vehicles to target onto it. Note that it cannot be kept if the Remote Control Unit is installed. 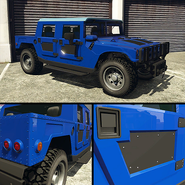 The Patriot Mil-Spec in the cinematic preview on Rockstar Games Social Club.