Luis fighting off the attackers.

• ­Go inside the club and find Tony.

• ­Clear the area of Bulgarin's men.

Ladies Half Price
For the Man Who Has Everything

Rocco: "You fucking moron! You fucking killed yourself just then. There's Russians, fucking everyone, they're coming after you, the old Man, you're fucking dead, the both of you. They're coming any second and they're expecting corpses."
Luis: "We better not disappoint them..."
― Rocco Pelosi and Luis Lopez, after Luis shoots Uncle Vince.

Party's Over is the penultimate storyline mission in The Ballad of Gay Tony, and the only one given to protagonist Luis Fernando Lopez by Rocco Pelosi.

Rocco will call Luis (or Luis can call Rocco) and tell him to meet him alone in the public toilets in Middle Park. Luis meets Rocco, who has Uncle Vince alongside him. During the meeting, Rocco informs Luis that Ray Bulgarin has spoken to Giovanni Ancelotti and demanded the head of anyone involved with the diamond deal. This, combined with his daughter's kidnapping, the angry Triads from the shootout and Tony's debt to Rocco, has led Ancelotti to order the deaths of either Tony or Luis. Since Rocco would prefer to work with Luis, he tells Luis to meet them at Maisonette 9, kill Tony and take control of his clubs, with Luis and Rocco running them as partners. Luis refuses, but Rocco leaves and tells him to meet them at the club anyway.

Luis arrives at the club to find Rocco and Vince explaining the situation to Tony. Rocco explains to the confused Tony that Luis is on their side, and Vince gives Luis a Pistol .44 to kill Tony with. Tony pleads for his life, but Luis reluctantly informs him that they have no other option. Luis prepares to shoot Tony, but after some hesitation shoots Vince in the head instead. This infuriates Rocco, who warns Luis and Tony that some Russian hitmen are on their way to kill them both. Luis threatens to shoot Rocco, but Tony tells Luis not to because of Rocco's made man status. Rocco flees the club, and Luis and Tony take cover. The cutscene finishes and the Russians enter the club. Luis protects Tony and kills the many waves of Russian hitmen, who are armed with Assault Rifles and SMGs.

After approximately four or five waves of enemies, Tony receives a call from Dessie, warning him that some more Russians are turning up in cars outside. Luis exits the club, where he confronts a final wave of Russians, who arrive on a car and a motorbike. Luis kills the Russians and meets with Tony again.

In the aftermath, Tony, shocked by Luis' "considered betrayal", informs Luis of his intention to sever his ties and flee the city. Luis attempts to reason with Tony, but Tony ignores Luis and walks off.

"Nightlife king, "Gay" Tony Prince spoke out yesterday after he had two clubs closed by the city. He said that the city should not try to turn itself into a version of the Midwest. Mr. Prince, who has run clubs in the city for 25 years, been to rehab 5 times, and also incarcerated for tax evasion, commentad, "I don't have a traditional family. I don't care about family values. That's why I live and work in Liberty City. If I wanted to go to bed at 8pm and worry about noise and hate people who weren't identical to me, I would go and live in Ohio. Nothing against Ohio. I went there once. I just used it as an example. Liberty City is supposed to be threatening and dangerous and challenging. Right now, it's about as challenging as a dog show." The LCPD spokesman we interviewed noted, "Mr. Prince's clubs were violating 8 city ordinances, and were undoubtedly places where drugs were being consumed. He is lucky he is not back in jail.""

"Thankfully, we are not complete losers. We've almost won one war - fun has almost been defeated. Nightclub-owning degenerate, Tony Prince, noted yesterday that Liberty City has been transformed into a strip mall. And not before time. The quicker we shut all the nightclubs there the better. Fun can be stopped, and we will prove it."

"Some strategists are saying that, "We should focus on this war, so we don't make the same mistake as the Nazis and try to fight a war on two fronts. Let's defeat fun first then focus on everything else we hate, like Europe." 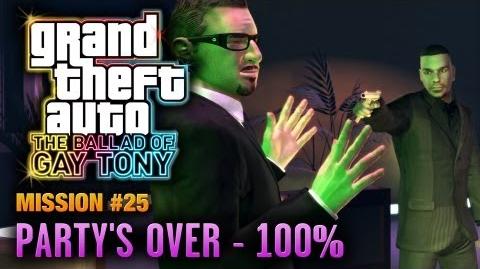 The reward for beating the mission is $5,000 and the final storyline mission, Departure Time, is unlocked.

Vince tells Tony that Luis is working for them now.

Luis points the gun at Tony.

Luis shoots Vince instead of Tony.

The Russian hit-squad's back-up arrives outside Maisonette 9.
Add a photo to this gallery

Retrieved from "https://gta.fandom.com/wiki/Party%27s_Over?oldid=1288178"
Community content is available under CC-BY-SA unless otherwise noted.