Standard White - 100%
“This is not an accessible sports car. It won't rub its avant-garde bodywork in your face and let you grope its dashboard on the first drive. It's dignified, sophisticated - even a little aloof. It will only reveal its charms for just the right handler. But one day, after years of practice, you'll become aware of the utter contempt in which you now hold the rest of the human race, and you'll know you can finally say "I drive a Pariah."”

The Ocelot Pariah is a sports car featured in Grand Theft Auto Online as part of the Doomsday Heist update.

The Pariah takes prominent influence from the Aston Martin Vanquish Zagato, with a series of mixes from the Ferrari 812 Superfast and Ferrari Portofino, evidently on the headlights and grille. The taillights seem to be inspired by the ones found on the 2014 Dodge Viper SRT, which coincidentally makes the rear resemble that of the Furore GT, an in-game Lampadati vehicle.

The front end of the car features a carbon-fibre splitter at the bottom, which spans the whole width, followed by an inset section that is curved and houses a narrow central intake and two larger ones on the outer edges. The area above the inset section is predominated by the main grille, which spans almost the entire width of the car and follows the curvature of the inset section on the lower line, while the upper line is relatively flat. On the upper section, the car has a small Ocelot emblem on the centre and two large housings on the edges, whose upper portions reach the lateral seams of the bonnet and have smaller ducts on top, while the lower portions are finished in carbon fibre and house circular headlamps. The bonnet itself has a slightly bulged profile on the centre and features two black intakes around the middle, which opens to reveal the engine bay, a strut brace and two black tubes coming from the side ducts, intended for cooling purposes.

The sides of the car are relatively simple and features a set of exit vents on the front fenders, followed by inset formations passing through the doors, the bulky rear fenders and the black side skirts. On the glasshouse area, the car has black trim around the windows, on the inner separations and on the A-pillars, while the doors have large mirror shells with thin supports near the A-pillars. The roof has a slightly concave portion on the centre and a single hatch behind the cabin, with a large window glass and the manufacturer emblem on the end.

The rear of the car is very similar to that of the Furore GT, featuring a square-shaped outline, a concave portion on the upper area and modern tail lamps on the upper corners. The sides have distinctive grooves/ridges right beside the rear outline, while the lower area is predominated by a large light gray/silver diffuser with meshed vents and dual exhaust tubes on either side, along with a black trapezium-shaped section on the centre that holds the license plate. The interior is shared with cars like the FMJ and the Tempesta, having carbon-fibre paddle shifters behind the steering wheel and the Ocelot emblem on the horn cap.

The primary colour of the car is applied on the bodywork, while the secondary one is applied on the outline of the headlamps, the main spokes of the stock rims and the interior stitching. It uses a unique set of rims, consisting of six main spokes and dual thinner ones between each main spoke, wrapped in low-profile tyres. 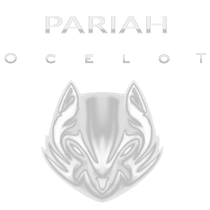 Performance-wise, the Pariah is in a league of its own. It excels in the Sports class, more than the likes of the Elegy RH8, Neo, and Jugular, and would be competitive in the Supers class. Despite being powered by what seems to be a large displacement inline-4 engine, it has supercar-levels of engine power, giving it unusually high top speed and acceleration. Its sheer power output also brings about a lot of wheelspin off the line and around corners, requiring a bit more throttle control than most sports cars. Handling is decent, although traction loss is often experienced when going over bumps. It also has a tendency to have minor body roll due to its light weight.

Overall, these traits make the Pariah the recommended choice for Sports class races with more straight sections and smoother roads. More technical tracks may call for better handling and cornering ability, in which case the Itali GTO or Comet SR would be a better choice. On especially tight tracks, quickly-accelerating cars like the Imorgon or Neon could outpace the Pariah.

This makes it, when fully upgraded, the fastest “normal” car in the game in a straight line, outpacing the Banshee 900R, Deveste Eight, 811, and nearly all Arena War vehicles equipped with nitrous. The only land vehicles with higher top speeds are the BF400 when doing a wheelie, or those with boost functions (i.e. the Vigilante, Scramjet, Oppressor, ZR380, Toreador or Deathbike).

As mentioned above, the car uses a twin-cam 4-cylinder engine with an air filter on the intake, coupled to a 5-speed gearbox and powering the rear wheels. Its engine sound is very similar to the one used in cars like the Coquette and the Jester, albeit edited with the engine sound used in cars like the Comet and the Tailgater, barely heard on higher engine revolutions. 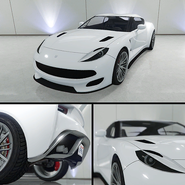 The Pariah on Legendary Motorsport.

The Pariah on the updated Rockstar Games Social Club.

The Pariah in the cinematic preview on GTA Online Rockstar Games Social Club. 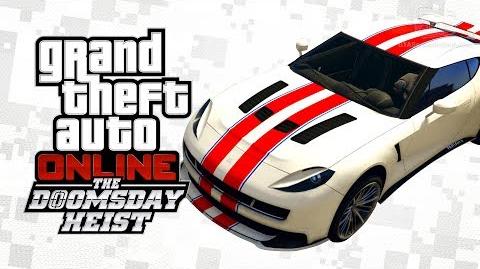