The vehicle is essentially the armoured variant of the Paragon R, which features armour padding on the sides and window armouring on the pillars, in a similar manner to the armoured vehicles featured in the Executives and Other Criminals update.

Colour distribution is the same as the regular Paragon R, where the primary colour is applied on the body, while the secondary colour is applied on the mirror shells and the interior stitching. A trim colour is also available for the dashboard, steering wheel, doors, seats and the optional roll-cage's paddings. Its wheels share the same rim design as the "Drag SPL" muscle rims available in Los Santos Customs, wrapped in high-profile tyres.

The vehicle is armed with two machine guns placed where the lower turn indicators are located on the regular version.

Similar to the regular Paragon R, the amored version excels in the Sports class and has a great amount of speed coupled with its smooth handling, especially at weaving through congested traffic. And with further upgrades, the vehicle can prove itself to be a worthy competitor.

Again, the vehicle retains the same engine model from the regular version, powering all four wheels in an equal distribution, through an 8-speed gearbox. The engine sound is the same as the regular Paragon R.

Like the armoured cars from the Executives and Other Criminals update, the vehicle features armour padding that allows the vehicle to survive one direct explosive hit, as well as bullet-resistant glass that can withstand 15 standard rounds before being shattered.

Machine Gun: The driver has access to two front-facing machine guns, which perform the same as those of vehicles such as the Blazer Aqua and the Ruiner 2000. They have decent firepower against players and vehicles with none or light armour, but will struggle against heavily-armoured vehicles.

Paragon R badge from advert, also used for the advert for the non-armored version. 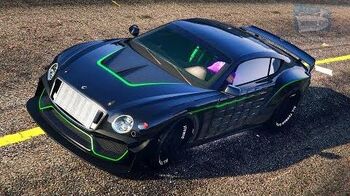