Standard White - 100%
“This is it. Wrap it up, folks. Thanks to Enus, humanity's quest to design the perfect grand tourer is finally over. It took generations of privately educated stiff upper lips, all prepared to dig deep into bottomless wells of lazy entitlement - but credit where it's due. The Brits cracked the code. This is the kind of self-assurance that can't be earned. It can only be bought.”

The Enus Paragon R is a grand tourer featured in Grand Theft Auto Online as part of The Diamond Casino & Resort update.

The Paragon R is based on the 2018 Bentley Continental GT, seen in the body shape. The front bumper seems to be derived from the BMW M3 (F80) and BMW M4 (F82/F83), while the headlamps were most likely taken from modern Porsches, such as the Porsche 991. The tail lamps and rear chrome trim might be based on the Lagonda Taraf.

The Paragon R features a build similar to the Cognoscenti Cabrio, being a large coupé with aerodynamic design and two doors. On the front, a small central intake can be seen surrounded by coloured separations forming a trapezium, followed by two other intakes of a slightly larger size and a carbon-fibre bottom. The upper area of the car features a mesh grille with a chrome surrounding, along with a set of dual stacked circular lamps within a circular light strip, and dual turn signals. The bonnet has a trapezium-shaped formation in front of the windscreen and bears the manufacturer emblem on the front.

The sides of the car are characterized by the ridges on the upper areas of the wheel arches, as well as vented front fenders, slightly extended rear fenders and plastic-like skirts at the bottom. On the greenhouse area, plastic trims can be seen around the windows, along with a plastic strip for the windscreen wipers and black side mirror supports.

The rear of the car features a concave panel with a small boot lip, where a chrome strip can be seen between the tail lamps, bearing the "ENUS" lettering on it and the manufacturer emblem below. A section for the license plate can be seen on the lower centre, while the bottom has a plastic bumper with two open sections for the dual exhaust tubes.

The vehicle uses its own "New Muscle White" interior; it reuses the same features from the "Specter" interior, but the dashboard if flattened and has a more rectangular passenger glovebox compartment. The dials are also reused from the Specter, but the analog speedometer replaces the fuel/temperature gauges on the left, and the centre is occupied by a digital display.

The Paragon R excels in the Sports class and has a great amount of speed coupled with its smooth handling, especially at weaving through congested traffic. And with further upgrades, the Paragon R can prove itself to be a worthy competitor.

While the engine model is not entirely clear, it seems to emulate the Continental GT's W12 engine, given the six protruding carbon-fibre details on each cam cover. It powers all four wheels in an equal distribution, through a 8-speed gearbox. The engine sound is similar to the ones on the Windsor and its four-door, convertible variant.

Official screenshot of the Paragon R. 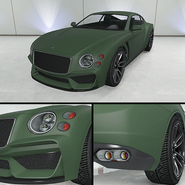 The Paragon R on Legendary Motorsport.

The Paragon R on the updated Rockstar Games Social Club.

Paragon R badge from advert, also used for the advert for the armored version. 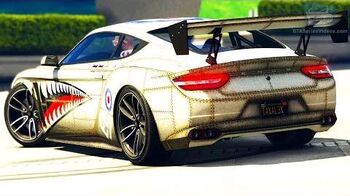