The safehouse as it appears in Grand Theft Auto San Andreas.

Are You Going to San Fierro?

Paradiso Safehouse is a safehouse found in Paradiso, San Fierro, in Grand Theft Auto: San Andreas. This safehouse is unlocked after the mission Are You Going to San Fierro? and can be purchased for $20,000. It is a medium-end apartment with a garage that has a capacity to store two vehicles. Pedestrians have been known to enter the garage and attempt to drive away in one of the vehicles parked inside. 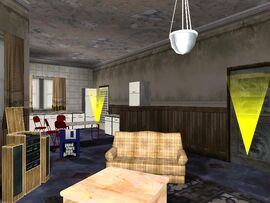 The interior of the safehouse.

Retrieved from "https://gta.fandom.com/wiki/Paradiso_Safehouse?oldid=1191366"
Community content is available under CC-BY-SA unless otherwise noted.