GTA Wiki
Register
Don't have an account?
Sign In
Advertisement
in: Pages with unclear information, Vehicles, Vehicles in GTA V,
and 9 more
English

No (Original version)
Yes (Enhanced version; pre-modified only)
“The Bravado Paradise is the fun, fuel-efficient, compact campervan you've been waiting for, because a family of four entombed in a tiny metal box for a week is everyone's idea of a perfect vacation.”

The Paradise is a variant of the Rumpo, being converted into a beach camper van. The Paradise, unlike the Rumpo, features side windows with curtains inside. Another feature seen in the Paradise, not present on the Rumpo, is an upgraded V8 engine and a front license plate mounted on the bumper.

The vehicle comes with a white roof and four different liveries. It also spawns with either opened or closed curtains. After an update[vague], purchased versions will be painted black instead of white. This cannot be resprayed. 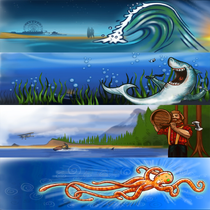 The Paradise performs quite similar to the Rumpo, being a variant, and like so, it has moderately high speed and only mid-level handling. It can, however, perform a bit better off road than the Rumpo. The Paradise can perform decently if modified in Los Santos Customs.

The large size of the Paradise makes it very useful as mobile cover, especially if it is fitted with armor and bulletproof tires. Its size, weight, and resilience to damage makes up for its slow acceleration. It is best to park it with the right side facing the enemies, so the driver and rear passengers can quickly exit and take cover behind the left side of the vehicle. 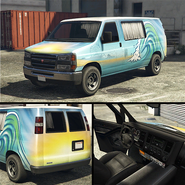 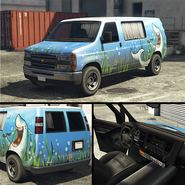 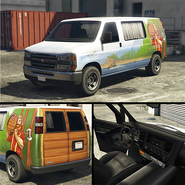 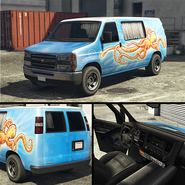 The Paradise in the original version of GTA V. (Rear quarter view).

The Paradise on the updated Rockstar Games Social Club.

The Paradise in the cinematic preview on GTA V Rockstar Games Social Club.

The Paradise in the cinematic preview on GTA Online Rockstar Games Social Club.