View source
watch 02:46
The Quarry - The Loop
Do you like this video?
Play Sound
For the parachuting missions in Grand Theft Auto Online, see Parachuting.
“If throwing yourself from stupidly high heights with nothing but a piece of material attached to your back with string for protection is your idea of fun, San Andreas has no shortage of spots to do it.”
— GTA V Manual

Parachute Jumps are a series of challenges available to protagonists Franklin Clinton, Trevor Philips, and Michael De Santa in Grand Theft Auto V. Finishing the jumps contributes to 100% Completion in GTA V and is required to advance in Dom Beasley's Strangers and Freaks mission string.

Although there is no indication or distinction anywhere in the game, the parachute jumps are actually divided into two subcategories: Base Jumps and Helicopter Jumps. Each type of jump contributes to 100% completion separately; that is, completing all Helicopter Jumps counts as one hobbies and pastimes, while Base Jumps count as another.

Parachute Jumps become available once the player completes Dom Beasley's Strangers and Freaks mission Risk Assessment. Each jump requires the player to parachute and land in a specific target. Some jumps require the player to hit certain check points on the way to the target, while other missions do not. No jump requires the player to free fall for any length of time; indeed, in most jumps, the player should deploy his parachute as soon as possible. For each successful jump, the player earns a cash reward based upon various factors, including how close the player landed in the center of the target, how many check points the player hit, and so on. While the jumps can be performed multiple times for cash, rewards decrease significantly after the first successful attempt.

Although any character can do the parachute jumps, only Franklin can trigger the mission that follows their completion, Uncalculated Risk. Franklin, however, will receive a unique greeting from the helicopter pilot given his past history with Dom.

Several of the jumps require heading into remote backcountry areas. As with most activities in those areas, keep the character armed and ready to defend against attacks by wild animals if on foot. Some of these jumps have vehicles parked near the landing zone, but some do not. If necessary, switch to one of the other characters for a while and allow the jumping character time to spawn back in civilization. 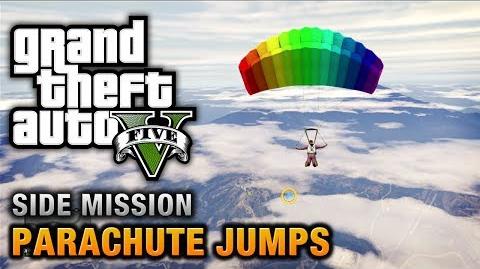