This article needs more images of:
Larger, higher quality of the GTA V rendition of the Parachute. Image of all variations of the parachute when deployed and parachute bags.

The Parachute in The Ballad of Gay Tony.

Wikipedia has an article on:
Parachute

The Parachute is designed for only one purpose in the games it appears in: to safely return the player to ground level after falling from a significant height.

In GTA games prior to Grand Theft Auto: San Andreas, death by falling occurs less frequently, resulting in the lack of need for parachutes. While considerable damage may occur as a result of falling in Grand Theft Auto and Grand Theft Auto 2, the top-down environment resulted in restricted height of buildings, lowering the possibility of such fatalities; with a full health, the player may fall roughly four times from a moderately high ramp before dying.

In most 3D Universe games including Grand Theft Auto III and Grand Theft Auto: Vice City, the player is allowed to access rooftops of multistory buildings and skyscrapers, but the player's resilience to damage by falling in both games is increased to a level where it is possible to unrealistically survive jumps off from a substantial height (i.e. a moderately tall skyscraper), although death may still be achieved by jumping off the rooftops of the tallest skyscrapers via extraordinary means (such as a third party teleporter). A lack of aircraft and ability to eject from moving vehicles or technical limitations in early GTA games are also factors for the late adoption of the parachute.

Grand Theft Auto: San Andreas introduced a more realistic range of damage incurred to the player when falling, where the severity of damage is amplified; jumps from moderate heights will deduct substantial amounts of the player's health, while jumps from extreme heights may result in certain death (unless the player's Health is full with the statistic at 100%, where falling from even the highest place will only result in approximately 95% of health loss). The parachute was introduced as a life-saving option, available in various high elevations throughout the State of San Andreas, including building rooftops, or after bailing out of any flying vehicles (an exception being the Andromada in the Stowaway mission) after obtaining a pilot's license by completing the Learning to Fly strand.

Utilizing the parachute is done by pressing the "fire" key, as with weapons. However, there are a few seconds of delay after leaping from an elevation before deployment is possible. Once the parachute is deployed, the player may control their descent by rotating left and right, and by pushing forward or pulling back on the main control to speed up and slow their rate of descent. Pulling back on the parachute also allows the player to land running, instead of falling prone, as occurs when not pulling back. Parachutes also introduce the concept of "freefalling" as the player is capable of entering a controlled diving position after jumping from a high altitude whenever he is wearing a parachute, rather than flailing whenever they fall from a height without one. The parachute can only be used once. After landing, the parachute is removed from the player's inventory.

While introduced in GTA San Andreas, GTA games released prior to The Ballad of Gay Tony have not resumed the adoption of the parachute and retain pre-GTA San Andreas fall damage, albeit being slightly more realistic.

“Fully steerable. Get the drop on enemies from above, or make a quick stealth escape from buildings to the street below.”
— Description from the TBoGT website

Parachutes are reintroduced in The Ballad of Gay Tony with a vastly improved design, flapping realistically with the wind when deployed. Parachutes are first used in the mission High Dive and then adopted for a number of missions in the game, and serves as an integral component for the game's interpretation of base jumps, which are available in single player mode as well as the multiplayer "Free Mode" (using the parachute in Team Deathmatch could allow for an entire team to paradrop into a combat zone). Base jumping in the game involves the player jumping off a number of skyscrapers in Liberty City onto moving trucks.

When parachuting, the player can use Cinematic Cameras to change the perspective and, in multiplayer modes, using a smoke trail whose color is determined by the player's ID color in the match.

The Parachute reappears in Grand Theft Auto V. It first appeared in a screenshot released on August 22nd 2012, showing a person using a parachute near a mountain.

The player is also able to deploy the parachute while on a bike that is falling in the air. However, the bike cannot be carried with the parachute as the player will eject from the bike and let it fall once the parachute is deployed.

The player can buy different colored chutes as well as smoke trails. Smoke trails can be activated by holding

after deploying the parachute.

Generally, when landing with the parachute, it is necessary to pull back the movement stick (or hold

to land safely. Landing while pushing forward on the movement stick will cause the character to faceplant, and this may lead to injury or death, especially on surfaces where precise landing is vital (i.e. hills, skycrapers, moving vehicles and others).

Unlike previous renditions, Parachutes are rather vulnerable to gunfire, and the player may experience involuntary movement when the parachute is being hit, until it gets "ripped apart" and is automatically detached. Parachutes can also be set on fire by nearby explosions, and will eventually be destroyed as a result, sending the player falling towards the ground.

After the San Andreas Flight School Update, players are able to equip a reserve parachute. A number 2 is shown in the parachute icon to denote the second parachute, serving as a backup when the main one is lost or used.

Much like clothes, purchasing a parachute customization option will mark it as being owned, and allows the player to switch between any that have been bought for free.

* Prices are applied to main parachutes. Reserve chutes are half of these prices.

The Parachute in The Ballad of Gay Tony. 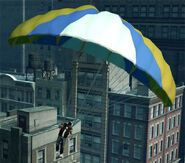 A deployed Parachute in The Ballad of Gay Tony.

Another scene of parachuting in Grand Theft Auto V.

Franklin parachuting off a bridge in Grand Theft Auto V.

Michael parachuting from the Miriam Turner Overpass, with the parachute burning after it got set on fire by an exploding plane

Shooting enemies from the parachute in Grand Theft Auto Online.

Skydiving over the wilderness. The parachutes are now changed.

Five of the parachute bags from the San Andreas Flight School Update, seen in the trailer.

In GTA San Andreas, since the parachute is controlled by script, there could be times when the parachute will not function correctly. These glitches are rare but can happen, such as when the game is processing too many animations, or if the player is using many cheats.