Wasted
Borodin gets away
Maverick destroyed

Niko: "For a guy who has asked me to kill a lot of men, this guy is really safety conscious."
Little Jacob: "Seen. He got that government ting about him: All for the greater good and ting."
―Niko Bellic and Little Jacob while performing a job for the United Liberty Paper Contact

Paper Trail is the final mission given to protagonist Niko Bellic by United Liberty Paper in Grand Theft Auto IV. This mission is one of the missions that are not triggered by going to the boss' destination; instead, it is triggered by a phone call from ULPC after Dust Off. United Liberty Paper's mechanics have finished inspecting the helicopter. Now, Russian businessman Eduard Borodin finally needs to be brought down. Niko will be phoned and directed by his contact to a landing strip in Northern Algonquin where Little Jacob will be guiding you in the passenger seat of the helicopter.

Niko meets Jacob at the salvage yard off of Grummer Road, then gets into the helicopter. As the helicopter lifts off the ground, Little Jacob will say that there is a rocket launcher on board and he will personally take down Borodin from the helicopter. Then, Niko flies south and locates the target chopper. The target is in that chopper, flying over Algonquin, and Niko has to follow him and waits for an opportunity to take it down. United Liberty Paper has ordered that there be no civilian casualties, so Niko keeps tailing in the helicopter until the target is flying over the water before firing a shot at it.

Niko chases the target helicopter until getting to sea - an area with no bystanders or witnesses. He gets close and moves to the right of the target chopper to give Jacob a shot.

When the rocket hits the target chopper, a cinematic execution scene shows the helicopter is on fire and falls towards sea. It explodes before this happens, therefore killing Eduard. Then Niko has to drop off Jacob at the helipad off on Union Drive East.

"Eduard Borodin died in a helicopter crash just south of Algonquin. Although some eyewitnesses suggested foul play and a dog fight between this and an unknown helicopter, local FIB officials tell me this was just an accident. One representative said it's clearly a tragic accident and due to the increased terror threat, some citizens are suffering from hysterical hallucinations."

"Multi-millionaire Russian businessman, Eduard Borodin, died in a tragic helicopter accident just south of Algonquin earlier. After Borodin's attempts to purchase a section of Middle Park had been blocked by the Mayor, he was flying around Liberty City in order to scout out a location to build a megamansion. Disaster struck and the helicopter plunged into the water. Many witnesses on the shoreline reported seeing a mysterious second helicopter apparently firing at Mr. Borodin's. Tourist Molly Jenkins of San Fierro stated that she saw, "these flashes of light like missiles come out of the other helicopter. Then the one in front, it just burst into flames.""

" Investigators for the FIB assure the public that there is no need to be alarmed. "Any witnesses who think they may have seen a second helicopter are just confused. It is merely an effect caused by light reflecting off the water. These 'flashes of light' are just a figment of their imagination. People are understandably nervous due to the raised terror threat." The Russian Consulate has accepted the FIB's ruling that the crash was an accident. No further inquiries will be made. Mr. Borodin had been in town to discuss buying the Liberty City Cocks."

(some missions after Paper Trail)
"Residents were frightered and feared a terrorist attack as a deadly helicopter battle played out over the skies of Liberty City. Deli owner Sal Robucci said, "I'm makin a fuckin sandwich, and all uh the sudden there's this fuckin racket, so I says to my boy Vinnie, yo, Vinchenzo, go see what the fuck that noise is. And he comes back in and says, 'Sal, there's two helicopters fighting in the fuckin sky,' and I say, 'Get the Fuck outta here Vinnie, you been smoking that shit, you're a pistol, you're funny, really funny. You stumbling mumblin little fuckin prick!' And I threw the knife at him and he ran outside. Man we have the best time. We make the best sandwiches. You want a good time and a good sandwich, make your way over to Sal's." Police says they are looking for clues as to the pilots in the helicopter battle. Anyone with tips is recommended to visit LibertyPolice.com with more info."

On rare occasions, when you start this mission, Niko and Little Jacob will not say anything during their chase to the target. When this happens, Little Jacob will not fire the rocket launcher, thus, this glitch will cause you to fail the mission. This glitch always occurs even if you repeat the mission and if you reload the save game data. The best way to avoid this glitch is to save the game before the mission and turn off the console. Restart the console, and when you start the mission, the dialog should start working again (Confirmed on PS3 and Xbox 360, unknown for PC). 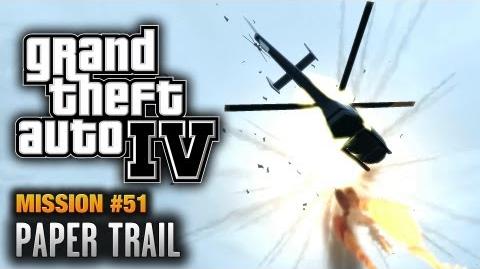