Although no Panoramic stores or businesses appear in GTA San Andreas, it is one of the sponsors of one of the Hotring Racer stock-cars.

Like Panasonic, Panoramic manufactures general electronics, like televisions and mobile phones. Flat-screen Panoramic plasma televisions and DVD players can be found in both the Middle Park East Safehouse and Playboy X's Penthouse.

There are also mentions on the in-game internet of a Panoramic mobile phone and on electronicwritingtablet.com, a Panoramic writing tablet called the HeavyPad is mentioned, but it is said to have gone out of production.

In GTA: Chinatown Wars, the PDA used on the Nintendo DS touch-screen is made by Panoramic (though the PSP renders a Badger PDA) as is the police car Liberty City Databases. Since they produce the Tinkle Cellphone, they are likely a partner of Tinkle.

Some pedestrians in GTA V can be found carrying a reflex camera with a Panoramic strap. This is likely a reference to Panasonic's Lumix cameras. In addition, a Panoramic sound-system can be found on the top floor of the Tequi-la-la bar in West Vinewood.

There are also many retail stores that can be found throughout the States of Liberty and Alderney:

A table top Panoramic television in the Middle Park East Safehouse in GTA IV. A wall mounted version can also be found at Playboy X's Penthouse. 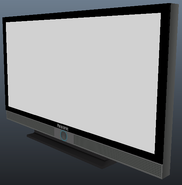 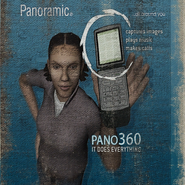 Panoramic Programmable Sequencer V12 at Tequi-la-la in GTA V.
Add a photo to this gallery

Retrieved from "https://gta.fandom.com/wiki/Panoramic?oldid=1183231"
Community content is available under CC-BY-SA unless otherwise noted.