It is located in San Chianski Mountain Range in Los Santos County, along Senora Way, east of the RON Alternates Wind Farm. Additionally, it is located next to a railway halt, where trains will occasionally stop.

If the player chooses to kill Michael De Santa, Franklin Clinton chases him to the top of one of the generating towers at the power station. Franklin pushes Michael over the edge before grabbing hold of him. The player can choose whether to drop Michael or hoist him up, but either way, Michael will fall to his death. Franklin calls Lamar Davis and leaves the power station. 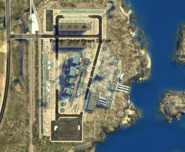 An aeriel view of Palmer Taylor-Power Station.
Add a photo to this gallery

Retrieved from "https://gta.fandom.com/wiki/Palmer-Taylor_Power_Station?oldid=1215483"
Community content is available under CC-BY-SA unless otherwise noted.