Paleto Bay is a small town located in Blaine County, San Andreas that appears in Grand Theft Auto V and Grand Theft Auto Online. It is situated northwest of the Paleto Forest, west of Procopio Beach and sits on the coastline of the Pacific Ocean and the northwestern foot of Mount Chiliad. It is mainly a residential area with some shops.

Paleto Bay is located on the lush northern coast of Blaine County, San Andreas. Sitting at the base of the massive Mount Chiliad, Paleto Bay is a coastal town, home to the Cluckin' Bell factory farm, used to process chicken for all of San Andreas to enjoy. The town also has a Los Santos County Sheriff's Department office, and the dense vegetation that grows around the area is a vast contrast of the dry and arid Sandy Shores. Paleto Bay is a good resting stop for truckers due to its large number of commodities and the fact that Route 1 runs right through the middle of the town. Lester Crest mentions in The Paleto Score that the body of water north of Paleto Bay is actually a river, not the Pacific Ocean.

According to a radio broadcast from Weazel News, the current mayor of Paleto Bay is Roy Buckley. He recently commented on worker discrimination in rural businesses. Paleto Bay is the typical small town settlement found in rural areas across America. Paleto Bay is much more modernised than other towns in Blaine County, such as Sandy Shores. There are several chain stores that operate in Paleto Bay, like Herr Kutz Barber. In fact, the Cluckin' Bell fast food chain operates a large chicken processing plant in the southern end of Paleto Bay. It appears that Paleto Bay experiences far less crime than other areas in Blaine County. However, despite the friendly image portrayed, Paleto Bay is filled with corrupt local police who are known to cheat the local residents out of their money through the Blaine County Savings Bank. The local police didn't hesitate to rush to the bank when a robbery occurred.

Paleto Bay is a small rural settlement in San Andreas. In the south, there is a Go Loco Railroad railway station situated behind the Cluckin' Bell factory farm. However, it is revealed that Merryweather Security has control of the railway station as well, which was seen when one of their courier trains was derailed. On the western side of the town, the Paleto Forest serves as a place for hunters like Cletus Ewing to hunt various different wildlife. The center of Paleto Bay is where all the shops and commerce are found. Recognizable chain stores such as 24/7 help provide the town revenue. The southern end of the town is dominated by the presence of a large railway station and factory, along with the hills leading to Mount Chiliad. The northern end of the town includes a small peninsula along with a few tiny islands. The eastern end of Paleto Bay is more dedicated to hard labor. A scrapyard, garage, and a small farm can be found. There's also a RON gas station.

Paleto Bay's coastal location with the Great Ocean Highway running through the middle of it, small town atmosphere, extreme adjacency to a coastal monolith (tall bluff on the southern peninsula/Morro Rock with Mount Chiliad bearing visual resemblance), and a large national forest (Paleto Forest/Los Padres National Forest), and location relative to Los Santos bear similarity to the town of Morro Bay, with elements of Big Sur and Cambria, in the Central Coast region. However, Paleto Bay contains other elements of inland southern Californian towns such as Gorman and Somis. 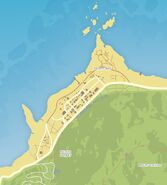 Paleto Bay and surrounding areas on the map. 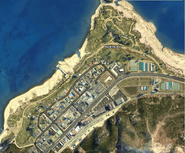 Satellite view of Paleto Bay.
Add a photo to this gallery

Another aerial view of Paleto Bay with Mount Chiliad in the background. 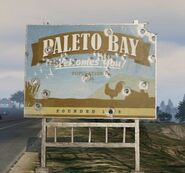 The sign at the entrance of Clucking Bell Farms.
Against The Grain GTAO.jpg
A grain farm at the northern end of Paleto Bay.

Mount Chiliad from Paleto Cove.
Add a photo to this gallery

Retrieved from "https://gta.fandom.com/wiki/Paleto_Bay?oldid=1033655"
Community content is available under CC-BY-SA unless otherwise noted.