Julie Marcus
“Harris. Good. Feminine touch. She'll be able to find any back doors they got.”
— Lester Crest

Paige is a professional hacker whose profile states that she is very skilled with computers. She has a heist cut of 15% and is the best choice of hacker in the game, with a very good knowledge of computers and alarm systems.

Her dressing style and overall demeanor is a mix of tomboyish and goth, sporting black outfits, tattoos and goth makeup and also does not seem to be in tune with pleasantries, especially with newcomers in the crew and Lester, whom she hurls insults at a lot. However, she is shown to be resourceful outside the hacking job while gathering intel, materials and outfits for the heists.

Paige is contacted by Lester during the Scope Out setup mission, asking to deliver some equipment to his factory. After meeting up, they arrive at the protagonist's apartment and Paige helps set up the board for their upcoming heist. Paige later meets up with the crew after they successfully stole the Kuruma used for the getaway vehicle and look after it for them.

She also appears at the end of some of the setup missions for The Pacific Standard Job, collecting the various items that the crew recover.

Paige can be selected in any heist. If she is selected in The Jewel Store Job, she will give a full 1 minute and 30 seconds to rob the store, the best time of all the hackers. Michael will even get impressed, saying: "90 seconds? Alright, that's why we pay you what we do".

If chosen for The Bureau Raid, Paige will know what to do to hack the computer and will be able to deactivate the sprinklers. Michael will compliment her, saying that "whatever we are paying you, you're worth it."

In The Big Score's subtle approach, Paige's connection with the traffic lights will have no lag, even if she doesn't have experience from any previous heist.

In 2018, she enters a business partnership with the GTA Online Protagonist. She builds a custom Terrorbyte for them to use in their various illegal ventures, but also for Client Jobs Paige runs herself. Dialogue from her during this time implies she has stopped working with Lester altogether.

Paige Harris is available as a Heist Crew Member to any player who owns a Terrorbyte.

If selected as the hacker for the Casino Heist, Paige provides 3 minutes and 25 seconds in the vault if the players remain undetected upon entering it. If the team is detected, she will give 2m 23s in the vault.

She takes 9% from the take and is the second most expensive hacker, the first being Avi Schwartzman. She, along with Avi, are classified as 'Expert'.

“Your friend Paige is very skillful woman, yes? Charming, too. We have so much in common. She has cooked up a special dish just for you. Reconnaissance drone. Sneaky enough to fit up El Rubio's nose without him noticing. Take down air defenses, deploy this, all guard positions will be revealed to you.”
— Pavel to the player when selecting the recon drone support crew option in the heist planning screen.

Paige Harris is available as a support crew member for The Cayo Perico Heist and costs $25,000 upfront to be hired provided the player owns a Terrorbyte. She is not seen or heard but provides a reconnaissance drone that reveals the positions of all guards on the island. Requires air defenses to be disabled and is the only air support that functions inside El Rubio's Compound.

“Hey, it's Paige Harris. I work with Lester Crest... I basically run things over there while he takes credit.”
— Paige Harris when calling the GTA Online Protagonist.

Paige Harris possesses a sarcastic and snarky personality, being openly dismissive and insulting towards Lester Crest, whom she works with. This apathy initially extended towards the GTA Online Protagonist and their crew, however, after working with them she seemed to have at least gained some respect for them as she later leaves Crest to enter into a business partnership with them. Other than her insulting behavior, she is also shown to be impatient with some people such as Avi Schwartzman. 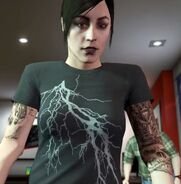