In all of its appearances, the Packer bears resemblance to a 1986 Peterbilt 379 Car Carrier, with a single body setup (without a dedicated trailer to transport cars) and a 10-wheeled design layout.

In Grand Theft Auto: Vice City, the cab design is strongly similar to that of the Linerunner (albeit with larger headlights), while the rear section consists of the main chassis with side fuel tanks, guard rails with yellow-black warning patterns, various marker lights on the sides, and a set of square tail lights and license plate on the rear end. The Packer is unable to transport vehicles, as they cannot be attached, and remain stationary while the Packer simply rolls out from beneath them. However, it can be used as an ideal portable ramp to set up for stunts, as players usually approach it at speed to jump and clear walls, fences and low buildings, and to drive onto rooftops (either by jumping from or driving up the ramp to climb them) and other high places.

In Grand Theft Auto: San Andreas, its appearance is similar to GTA Vice City's rendition, except that it has circular headlights, vents on the sides of the hood, and four tall frames on the back, where the ramp is holding. It is possible to safely store one car on the Packer due to its ability to move the upper ramp up and down; this is done by driving it onto the bottom ramp and slowly closing the top ramp down. If the ramp goes too far down, however, the car will get crushed and explode. It can transport up to three vehicles due to the ability to elevate part of the ramp; however, cars can still roll off at sudden stops, so the player must operate it with high sensitivity to keep the cars safely in place. The truck can unexpectedly suddenly stop as if it were hit by the car(s) being carried.

Both renditions can spawn in a variety of single colors applied to the cab and rear section.

The Packer in Grand Theft Auto IV is based on a Kenworth K-100, although it shares details from 2000-era Freightliner cab-over trucks, mainly the square-shaped radiator grille.

The truck assumes a cab-over-engine design and a similar layout to its previous rendition, where the front end features a large heavy-duty bumper with a single vent in the center and numerous black details around it. The upper area is mostly predominated by a tall grille with the MTL badge on top and "V24 SUPERCHARGED" badging around the lower left corner, while the headlight units can be seen on either side of the grille, consisting of dual main units and single amber indicators below them. The uppermost area of the cab features a split windshield with black wipers and silver trim around, a central vent detail and what seem to be grab handles below, together with silver strips on either side of the grille, running down the whole cab. The sides of the cab feature long access steps and grab handles, while the doors bear silver handles and badges displaying the truck's manufacturer and name. On the upper area, the truck has large rear-view mirrors and square windows, as well as a silver detail next to the windows. The roof area features a silver visor above the windshield, dual marker lights and single trumpet horns on the frontal corners.

The rear section is predominated by the main chassis, with large fuel tanks mounted on either side and gray platforms above, while the rear end features a set of circular tail lights and large mudguards with silver badging displaying the truck's manufacturer and name. On the underside, the truck has two long exhaust pipes mounted below the chassis, while the gearbox and drive shaft can be seen connecting the rear axles, also visible from above.

The truck spawns with the traditional flatbed configuration, or with a large tanker (whose content is unknown) and the ramp configuration similar to its previous iteration, with articulated frames around the front quarters and rear. However, the ramp configuration has no utility for transporting cars or even perform stunts, as there is no extension reaching to the ground.

The Packer spawns in a variety of primary colors for most of the cab and secondary colors for the lower portions of the same. It uses a set of industrial wheels that are also shared with the Benson, the Mule and the Phantom.

The Packer returns to Grand Theft Auto V and Grand Theft Auto Online; however, it assumes a completely different appearance. The Packer becomes a semi truck as oppose to a regular truck unit. The initial cab design resembles the International 4700 series as does the Stockade, although the sleeper cab configuration resembles a Mack Vision CX613. With the additional cab-mounted air deflector, the truck resembles the Mack Pinnacle CXU613, a variation of the Vision with improved roof aerodynamics. The overall model also appears to resemble a 1994 International 9000/9200.

The majority of the design is based around two existing vehicles: the Brute Stockade and the JoBuilt Phantom. A large portion of the front area of the vehicle, particularly the hood, lights and fenders are identical to the Stockade. The hood and grille lacks any badging, and the grille itself has comparatively less vertical elements than the Stockade, but the general shape remains the same. The truck also sports a new commercial bumper, and sees the removal of the hood mirrors, hood catches and the arch cladding present on the Stockade. The area surrounding the bulk head of the truck is altered, as the front is merged with the cab section of a Phantom; the split windscreen, mirrors, the cab roof, including the sun deflector, lights and horns, and the side steps and are all carried over to the Packer; however, several changes and removals have been made to the cab too: the side tanks have been removed, although the connection hole remains (albeit covered over), smaller windows have been added to the lower half of the driver and passenger doors, and the door windows have also been changed. The chrome portion beneath the doors has been made paintable, although it still has the original marker lights and rivets. Much of the sleeper cab has also been carried over, albeit having been made slightly shorter in length and raised to accommodate a new sleeper roof. Unlike the Phantom, the Packer's exhaust stacks are mounted behind the sleeper cab. A new sleeper roof also houses a small window on either side. Fuel caps have been added to the side fuel tanks. The rear bumper and fifth wheel mounting is identical to the Phantom; however, additional rear fenders have been added behind the rear tag axle.

The truck shares its cab with the Flatbed and Pounder, both also badged as MTL. The original GTA IV Packer appears as a semi-truck as the Hauler in GTA V. The truck is fitted with a CB radio, and occasional trucker chatter can be heard regardless of whether the main radio is turned on or off. The chatter will only play if playing as Trevor and in Blaine County.

The Packer spawns in a variety of single colors applied to the main body, front bumper and rear fenders, and it uses a set of industrial wheels also shared with the Benson, the Mule and the Phantom.

The Packer has overall bad handling and acceleration. Unlike most other trucks, however, it has good durability, surviving many crashes but not so many explosions. It can push small cars away without restraint, but it is slow and hard to control due to its long body and wheelbase.

The Packer is powered by a large diesel engine, coupled to a 5-speed gearbox in a front-engine, rear-wheel-drive layout. It shares the high-pitched engine sound from the Linerunner and trucks such as the Tanker and the Roadtrain.

The Packer returns in the HD Universe, albeit much faster thanks to its powerful engine and possessing better handling due to its relatively short wheelbase. Having a good chassis, it can withstand a fair amount of crashes, and at least 2–3 head-on explosions before exploding. Having a low top speed and a lot of weight, the vehicle is very slow and is not helped by its rear-wheel-drive layout; however, it is acceptable considering its load and purpose.

The Packer is claimed to be powered by a 24-valved supercharged engine (mistakenly stylized as "V24 supercharged"), which powers the rear wheels through a 7-speed gearbox (a considerably high-yet-accurate amount), where the gear shifts are very low and ratios seem almost equal (apart from the last gear).

The Packer's engine sound is shared with the Fire Truck, the Trashmaster and the Ripley, not being as smooth as the Mule's nor as loud as the Phantom's.

The performance of the Packer this time is stellar. The top speed is above average and the acceleration is the best out of all semis. However, like a typical semi, handling requires some braking, but not as much as one would think.

The Packer is claimed to have a 24-valved supercharged engine, according to badging, but its in-game model appears to be a single-cam V8 engine due to the spark-plug textures. It powers the rear wheels through a more conventional 5-speed gearbox, and uses a similar sound from trucks such as the Fire Truck, the Trashmaster and the Ripley.

A Packer loaded with Infernuses...

...and an SFPD car crushed in a Packer.

A Packer with a tanker in Grand Theft Auto IV. (Rear quarter view)

A Packer with a ramp in Grand Theft Auto IV. (Rear quarter view)

The Packer on the updated Rockstar Games Social Club.

The Packer in the cinematic preview on Rockstar Games Social Club. 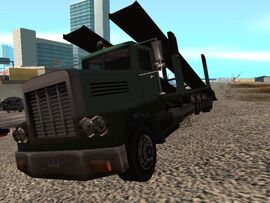