It is located at the intersection of Alta Street and Vinewood Boulevard in Downtown Vinewood, Los Santos, neighboring the iconic Oriental Theater. After the Heists Update, the bank is accessible in Grand Theft Auto V, though it can't be robbed. Despite this, the player can still wander through most of the bank, even areas behind the tellers, without a wanted level or other issue. During the day, customers and tellers are present; at night, the bank is deserted, but can still be explored.

The bank has a distinctive Flow Water advertisement above it, and it is recognizable by the peak on top.

The building is based on the First National Bank of Hollywood, located on the corner of Highland Avenue and Hollywood Boulevard in Los Angeles. The large Flow Water advertisements on the building's profile could be based on those of the Sunset Vine Tower.

In Robbery in Progress, the bank is one of the locations that The Professionals can rob. When viewing the security cameras, the robbers can be seen taking care of crowd control in the lobby, with one of them shooting a civilian who tries to run. 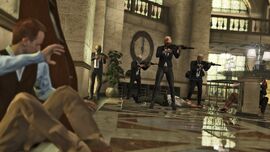 South side of the building.

West side of the building. 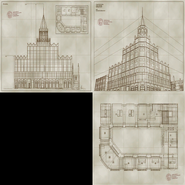 Schematics of the building.
Interior

Lobby of the bank.

Staff area of the bank.

Entrance to the vault.

The deposit boxes found at the bank.