Pacific Standard - Signal
“Source the the getaway vehicles for the Pacific Standard job. Take four state-of-the-art sports bikes from The Lost MC Clubhouse in East Los Santos and store them near the bank.”

Bikes is the fifth and final heist setup for the Pacific Standard in Grand Theft Auto Online.

The crew is instructed to go to the Lost MC clubhouse in East Los Santos, where Lester informs of Lectro sports bikes being stored there, which could be useful for the heist.

The clubhouse is heavily guarded and The Lost members will attack the crew if attacked, so the crew has to be careful and plan an approach to retrieve the bikes. There will be several enemies at the entrance and central area, as well as some of them behind the buildings. Two bikes are seen at the parking area near the clubhouse's entrance, one at the other side of the main entrance, and one stored inside a garage on the right.

Once the crew manages to steal the bikes, they are instructed to leave the bikes in an alley in Downtown Vinewood, near the GoPostal building. Lester warns about Lost MC reinforcements on the way, which have to be evaded. The gang will chase the crew in Daemons, while a roadblock composed of Gang Burritos will be set up on the shortest route.

Once approaching the marked area, Lester informs that they are in the clear, so the crew can safely leave the bikes at the drop-off location to complete the mission. 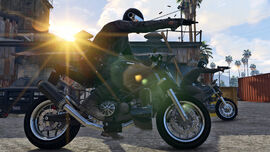 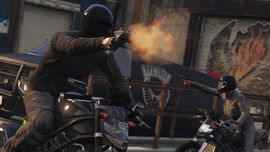 The crew stealing the bikes.