GTA IV & TBOGT
TLAD
“A cruiser, for the weekend warrior who is holding on to the dream.”

“Macho bike for men trying to prove how much they're packing.”

The bike normally spawns in a variety of single primary colors for the body, with the GTA Liberty City Stories version having a secondary-colored portion on the lower side.

In Grand Theft Auto IV, the PCJ 600 has been redesigned into a streetfighter, resembling a Honda CB400 Super Four and Triumph Speed Triple.

The bike retains some of the similarities with previous renditions, but has notorious changes on the front and sides. The front section features a large fender mounted to the fork legs, while the upper side holds the frontal lights. The upper clamp/plate holds two independent handlebars with mirrors on either side and two dial pods on the centre. The main body is rather basic and features a large fuel tank with "Shitzu" badges on the sides, while the engine bay features a front radiator and three exhaust tubes running towards the lower side. The rear section is mostly occupied by a black seat with room for two occupants, foot pegs for both the rider and the passenger and a single red tail lamp on the end, as well as badges displaying the bike's name and manufacturer on the rear portion, and the engine specifications on the lower side borders. The rear wheel is connected by a dual-sided swing-arm with a single suspension spring, with the chain drive and sprocket on the left side.

Unlike its predecessors, the bike comes with a variety of accessories that allows for many variations of the bike, including:

In Grand Theft Auto V and Grand Theft Auto Online, the PCJ-600 retains the design from GTA IV, albeit with a gold finish on the front fork legs and the badges being more visible, due to them being changed from black traditional markings to silver embossed lettering. Most of its original extras are available in Los Santos Customs, with the exception of the headlamp and dial pod options, as the former is determined by the extra chosen upon spawn and the latter being always black. In the enhanced version, the pods use updated analog dials that is shared with most sports bikes.

Colour distribution is a bit different, as the basic frame is painted with the secondary colour and the rims use a dedicated wheel colour, which can be painted by selecting a custom rear wheel, applying a colour and change back to the stock wheel (as it won't reset to the default alloy colour). It retains the same rim design and the wider rear tyre. 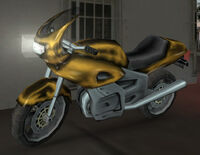 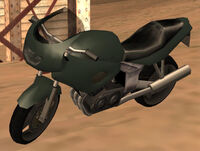 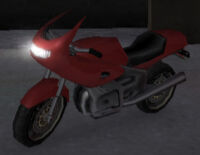 Excluding the GTA San Andreas rendition, the PCJ-600 is one of the fastest bikes; in GTA Vice City and GTA Vice City Stories, it is tied with the Angel. Overall performance is exceptional, except in handling — high-speed impacts often result in being thrown from the bike, resulting in severe injury or even death instantly. It requires more traction to balance the performance. In GTA San Andreas, the PCJ-600 is no longer the fastest bike, outpaced by the NRG-500 and FCR-900.

The PCJ 600 in GTA IV is a high-performing motorcycle. It has a good acceleration rate, with its apparent liquid-cooled 3 cylinder engine accelerating it to 60 mph in a short space of time. Its top speed is one of the highest of the motorcycle class. In terms of handling, the motorcycle is mediocre; the bike has a limited turning radius, so a large amount of oversteer is present in corners, often resulting in crashes if the player is travelling at around 50 mph or over. The vehicle has to be travelling at low speeds for a safe corner without the risk of losing control. The vehicle's traction is average for the vehicle; while the vehicle does not spin often, acceleration on a corner will sometimes result in a burn-out without intention, and skidding is often when braking around a corner.

The engine is stated on badges to be a 12-valve, liquid cooled 3 cylinder engine, which is supported by the 3-1 exhaust manifold (3 into 1) seen on the bike. It has a high-revving and loud engine sound.

The PCJ 600 loses out in raw power and speed to it's larger rival, the NRG 900, but the PCJ's lighter weight and more balanced power delivery allows it to be handled easier than the NRG, and when leaning forward, it can keep up down a straight as well.

The PCJ-600 in GTA V has mediocre performance compared to larger capacity bikes. As expected from a standard bike, it does not handle as sharp as a typical sportsbike and reaches an average top speed, even when modified. Acceleration is still good, but seems to be downgraded from GTA IV. Despite these shortcomings, the PCJ600 is one of the most balanced bikes in the game, with stable handling and smooth power output, making it a very comfortable bike for street cruising and long trips.

Again, the engine is stated on badges to be a 12-valve, liquid cooled 3 cylinder engine, which is supported by the 3-1 exhaust manifold (3 into 1) seen on the bike. The engine noise appears to be a high-pitched version of the one used in the Sanchez.

* Plates are unavailable if the "Remove Plate Holder" modification is installed. 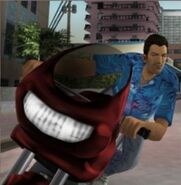 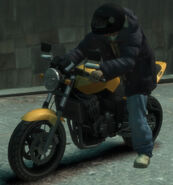 A PCJ-600 with single headlamp, basic frame and a right-mounted exhaust tube. Note the dial pod and rear-view mirror sets present at once. 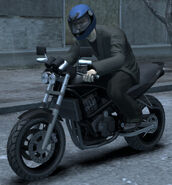 A PCJ-600 with dual headlamps, painted reinforced frame and rear-mounted exhaust tube. Again, the dial pod and rear-view mirror sets are present at once. 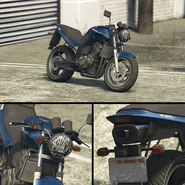 The PCJ-600 on the updated Rockstar Games Social Club. 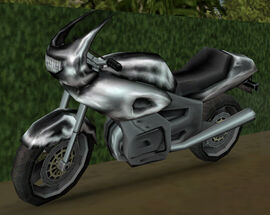