Standard White - 100%
“The Outlaw is a perfect steel caged steed for the modern cowboy. If the cattle rustlers and bounty hunters of The West were alive today, of course they'd be driving buggies. Treat any slope and sewer like a wild frontier and you'll find yourself bouldering all over the land of the free. Plus, the rattling engine will drown out your mom's disappointed speeches about growing up. It's a win-win.”

The Nagasaki Outlaw is an exposed UTV featured in Grand Theft Auto Online as part of the continuation of the The Diamond Casino Heist update, released on January 23, 2020, during the Outlaw Week event.

The Outlaw was initially featured as a mission-only vehicle in the "Getaway Vehicles" preparation and later used as a possible getaway vehicle in the Casino Heist. However, as of the Outlaw Week event, it became available for purchase.

The Outlaw is an ATV primarily based on the Can-Am Maverick X3 Turbo, as well as a few minor bodywork changes similar to the Yamaha YXZ-1000R buggy.

The Outlaw is a rather bulky vehicle with an unusual design and similar bodystyle to the Vagrant, where the front end is predominated by a set of three meshed intakes with two vertical protective frames, along with a set of circular headlights and modern strips beside the middle intake. The frontal area has black details on the outer portions and around the centre, as well as the Nagasaki emblem on top of the upper intake and an open section for the front suspension mounting. The area inside the front section is rather exposed and has a meshed intake leading towards the cabin area.

The sides denote its tall profile and lightweight body, where the front and lower portions are predominately finished in black, while the upper portions and the details on the skirting area are painted. The doors have triangular openings around the front and inset sections leading to a set of rear vents, which are angled upwards and aligned with the rear section. The cabin area mostly consist of a roll cage with additional bars on the roof area and two fire extinguishers straped to the rearmost frames (a somewhat odd setup, as the real-life iteration has shock reservoirs in the same rearmost frames). The area behind the cabin is basically a small bed, with open sections for the suspension mounting. Silver "NAGASAKI" lettering can be seen on the front, next to the doors.

The rear of the vehicle is rather minimalistic, where the upper section houses a set of tail lights on the outer edges and a single red strip in between, followed by a black portion with a plate holder on the center. The area below the small bed is mostly occupied by the engine bay, having dual meshed vents and a triangular open section on the center, housing three exhaust pipes.

On the lowermost portions, one can see the partially-exposed chassis and protective frames around the engine bay, whose underside is mostly carbon-plated. The suspension setup consist of various frames for the front wheels and pivoting arms for the rear wheels, with suspension springs with internal shock absorbers on each wheel and dual articulated bars running from the lower-rear center of the chassis to the rear wheels. Black drive shafts are seen connected to the center of each wheel hub, while the exhaust pipes end in a single tube connected to the triple exhaust tips.

The interior of the vehicle makes use of race-type components on the central console, as well as a knob on the driver side of the dashboard reading F/R, likely indicating a rear/four wheel drive locking diff. Its dial arrangement is very similar to the one from the Raptor, being two analog dials derived from the X80 Proto and a digital display in between.

The Outlaw is painted with a primary color for the lower intake, the details beside the headlights, most of the frontal section, the details on the skirting area, the upper section of the doors, part of the rear section and the rear vent/exhaust housing, while the secondary color is applied on the front bars, the chassis, the roll cage and the pivoting arms of the wheels. It uses a set of six-spoke rims similar to the "Endo v.2" rims seen in Los Santos Customs, wrapped in high-profile tires with rugged tread pattern.

The Outlaw is very proficient in off-road environments, with rock crawler suspension being able to deal with rough terrain, and its handling is very agile as well. While incredibly fast otherwise, its top speed is quite low, as it only has three (or four, if given full transmission upgrades) gears, making it far less recommended for races, and is beaten by other faster Off-Road cars at longer straights. Its tyres are also vulnerable to gunfire, so bulletproof tires are recommended. As it has no windows, the Outlaw provides very little protection for both the driver and the passenger from gunfire.

The Outlaw is powered by what looks like a flat-twin engine, with the model being similar to the one from the FCR 1000 and its Custom variant, coupled to a 3-speed gearbox in a mid-engine, all whell drive layout. The engine sound appears to be an edited and lower-pitched variation of the one found on sports bikes such as the Akuma, the PCJ 600 and the Vader. 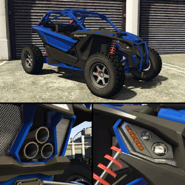 The Outlaw in the cinematic preview on Rockstar Games Social Club.

Unused badge featured in an advert. 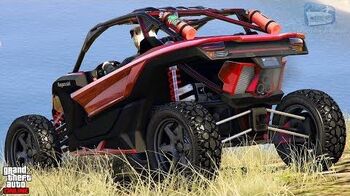 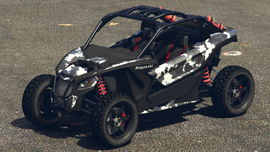 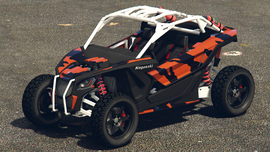