Out of Court Settlement

Out of Court Settlement

In-game time
“For an extremely right wing country, why does the United States have such a problem with wealth creation? It's crazy. The DA after me right now has so little respect for my impact on the economy, you'd think he was a socialist. Please take him out before he can take his evidence to the court, and bring it to me. I think he may be exception trouble.”
— Description

Out of Court Settlement is a mission in Grand Theft Auto Online given to the player by Martin Madrazo. It is available for up to 2 players.

An unnamed District Attorney is prosecuting Madrazo for his illegal activities and is taking the evidence to a courthouse. Madrazo orders the team to take him out before he takes his evidence to the court, and to bring the evidence back to Madrazo.

Players start in a parking lot off Strangeways Drive in West Vinewood. The DA is driving a Felon GT (usually with the top down) at normal speed. The team needs to take him out, collect the evidence, and lose any wanted level if gained.

The DA follows the same route to the Davis Courts Building:

On arrival at the Davis Sheriff's Station entrance, if the player has not spooked him by this point, he may stop and not enter the destination. If he has been spooked (either by vehicular collision, failed carjacking, gunfire or even seeing a weapon) and reaches the destination, the mission will fail.

If the player carjacks the DA from his Felon GT at any point, he will become aggressive and open fire with a Pistol.

Prior to the addition of earlier ranked missions for Madrazo in later DLCs, this was the first contact mission he offered the player. When arriving at Madrazo's house, he introduces himself and comments about his new life and his mansion, denying that it is for his mistress Natalia Zverovna. Afterwards, he invites the player to do more jobs for him.

If the player replays this mission, a random Madrazo cutscene will play, such as talking on the phone with his wife Patricia, claiming he's actually playing Golf.

Calm arrival at the destination.

Spooked arrival at the destination. 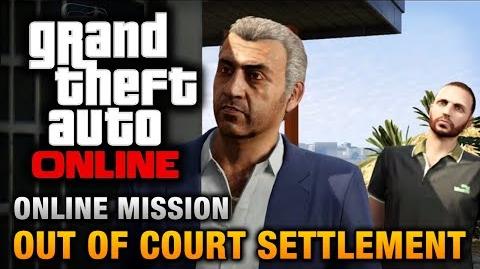 Players were able to keep the slightly modified Felon GT from this mission. This could then be sold for $22,000. This was later patched.