$250,000
You Won Achievement
Liberty City Minute Achievement (If the total game time adds up to 30 hours or less after beating the mission)

Niko: "Big talk. You wanna know something funny?"
Jimmy: "Not really."
Niko: "The Commission - the old families - I know some of those guys. And they thought you were a fat fucking joke."
Jimmy: "Whatever."
—Niko Bellic talking to Jimmy Pegorino, shortly before killing him.

Out of Commission is the final storyline mission in Grand Theft Auto IV, if the "Revenge" ending is chosen.

After Roman and Mallorie's wedding in the Revenge ending, Niko, who has been mourning the death of Kate, receives a phone call from Little Jacob telling him he and Roman found some of Jimmy Pegorino's mobsters in a building in Koresh Square in Alderney. Afterwards, the mission automatically starts as Niko goes to the two who are waiting in a Cognoscenti, and they begin to pursue the mobsters to Jimmy Pegorino.

After an extended car chase and dialogue between the three about why Niko is doing this, the two eventually lead them to an abandoned casino in the North of Alderney, with Niko telling Roman and Jacob not to join the fight and they do so. Niko then fights his way into the casino, until he finds Pegorino. Pegorino states that if he would've worked for him things would be better, and Kate's death was Niko's fault. He then runs away and boards a boat on a jetty after letting loose more of his guards which are killed. He then gives chase by using a dirt bike and staying on the shore. After a short while, Roman and Jacob arrive in an Annihilator. Niko then jumps onto it by means of a ramp, and Roman pulls him in the helicopter.

Once aboard, Niko takes over the controls (as Jacob claims that he's bad at flying) and flies over Pegorino's boat with Jacob shooting at it. The boat catches fire but due to a Rocket Launcher shot so does the Annihilator. Jimmy manages to escape from the boat at Happiness Island and run under the Statue of Happiness while Niko safely lands the burning helicopter and goes after Pegorino. Niko then engages in a gun battle with Pegorino, mortally wounding him in the process.

A cutscene then shows Niko confronting Pegorino as he slowly bleeds to death. Niko tells him about knowing people in the Commission and that says they thought he (Pegorino) was "a fat fucking joke", Niko turns his back on Pegorino. As he raises his gun to shoot Niko from behind, Niko quickly turns back and shoots Pegorino in the head, killing him. Roman and Jacob then show up and comfort Niko. Roman explains that now that their enemies are beaten, they can start making money freely and live peacefully. Even though Niko agrees, he is still grieving due to Kate's death. Niko, Roman and Jacob then leave Pegorino's body at the foot of the Statue of Happiness as the camera pans out to show the Liberty City skyline at sunset.

Two news stories run on Liberty Tree Online related to the Revenge storyline itself: one inaccurately detailing the death of Kate, and another noting the death of Pegorino at Happiness Island.

"Police have found the body of Alderney mob boss, Jimmy Pegorino, on Happiness Island. Mr. Pegorino had captured headlines as the boss of a crime family with designs of power. They were thought to be seeking parity with the Five Families who had been weakened in recent years. After recent legal pressure and escalating bloodbaths in Alderney, crime pundits began to see Pegorino's crew as pretenders, not the real thing. Police responded to reports of both a boat and helicopter crash on Happiness Island. Three suspects were witnessed leaving the scene and are being sought for questioning." 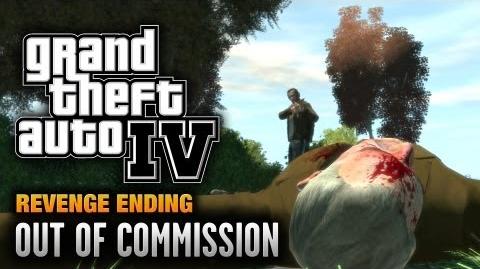