Standard White - 100%
“Osiris drivers boast the shortest average life expectancy of any consumer demographic of America. They live, briefly, in a world of bygone opulence and hyper-modern engineering. The 0.3 seconds between leaving the showroom and arriving at their first corner are the most exhilarating blur in their short, short lives. Only the stupidly rich need sign up to the waiting list.”
— Legendary Motorsport description.

The Osiris is heavily based on the Pagani Huayra, while its front end resembles the LaFerrari. The rear lights and main spoiler design take heavy influence from the Pagani Zonda as well as the Pagani Huayra, with the distinctively large humps on the rear with exhaust system built into the center.

The Osiris features a distinctively curved profile and aerodynamic design, where the front end has a dual extender at the bottom and three vertical separations above the upper extender, resulting in two large intakes around the centre and two smaller ones on the edges. On the upper area, the car has "frog-eye" headlights located in black housings on the edges, while the hood/bonnet area has a similar approach to the Cheetah, having a "V" shape raised formation. A silver Pegassi logo is located in the lower-front of the hood/bonnet area.

The sides of the car denote its aerodynamic profile, featuring exit vents on the front sections of the vehicle, curved impressions over the doors and carbon-fibre mirror shells and frames, while the rear sections feature intakes on the skirts, intended to vent the rear brakes. The cabin area denotes its rather disproportional layout, wherein the cockpit is further towards the front than the back, leaving room for the large engine in the mid position. Like the Stirling GT, it features Gull-wing doors, and exposes part of the carbon-fibre finish of the inner portions of the car, where the doors rest.

On the rear section, the car has additional intakes on top of the rear sides, intended to vent the engine bay. The upper area has a V-necked shape with an additional window glass, which is separated from the cabin rear window by a black frame and follows a similar layout to the Turismo R, albeit shorter. The rear end mostly consist of a carbon-fibre section with meshed exit vents around the centre, dual circular tail lamps with smaller units within them and a central brake lamp at the end of the V-necked formation, along with a silver Pegassi logo on the central vent and the Pegassi name below the right-side rear vent. The lower area is predominated by the carbon-fibre, six-element diffuser that is the same width as the upper vents, housing the license plate and the dual circular exhausts on the centre. This rear section also acts as a clamp for the engine, which hinges from the rear and opens to reveal the engine bay, the black protective frames around and the carbon-fibre finish on the inner areas of the car and the clamp. The underside of the car is also carbon plated, leaving part of the gearbox/diff exposed.

The interior of the car is shared with the Vacca, itself being a derivative of the one used in the Banshee. The same silver Pegassi logo can be seen on the horn cap.

The primary colour of the car is applied on most of the bodywork, while the secondary one is applied on the front extenders and outer intake separations, the skirts, the cabin area, the V-necked section of the rear and the rear quarters. The overstitches of the seats, steering wheel and dashboard match with the wheel colour. It uses a set of five-spoke dual rims with a black five-point centre, wrapped in low-profile tyres.

The Osiris is impressive for a car of its class. The initial acceleration is slightly better than the Zentorno, thanks to the increased traction. This traction, along with its AWD layout, makes the car very smooth at taking turns, and rarely requires a drift to take a sharp corner. The Osiris is also very impressive off-road, and it is able to compete with other off-road vehicles uphill given its AWD and high torque output. With off-road tires, it is very formidable. Its top speed is also slightly superior to the Zentorno, although a few supercars are still one-up it in top speed terms.

The Osiris (along with the Zentorno) does not have suspension upgrades available at Los Santos Customs. Despite this, the Osiris remains very stable due to its low profile and width. The specifications shown on Legendary Motorsport are also very similar to the real life specifications of the Pagani Huayra. Braking is noticeably better than other cars in the Super class.

The car is stated to be powered by a 6-liter V12 capable of pushing 750hp, yet the in-game model depicts a single-cam V8 engine similar to the Cheetah and the Turismo R, complete with intercoolers located directly after the side-intakes (suggesting the car is turbocharged). It has a 6-speed gearbox and an all-wheel-drive layout (30% front, 70% rear torque distribution). The Osiris' engine noise is shared with the Alpha's.

The Osiris front badge illuminated when the lights are turned on. 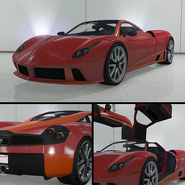 The Osiris on Legendary Motorsport in the enhanced version.

The Osiris on the updated Rockstar Games Social Club.

The Osiris in a Cinematic preview on Rockstar Games Social Club.