Benefit or Detriment from consumption

Orang-O-Tang is most likely an orange soda, similar to how a fellow beverage, Sprunk, is considered a lemon-lime one. It is most prominently featured as the can of drink which the player obtains from a vending machine in Grand Theft Auto IV; instead of a can of Sprunk or eCola as their respective vending machines would imply, the player retrieves a can of Orang-O-Tang and drinks from it, before discarding the empty can onto the ground.

In a similar vein to Munky Juice in Grand Theft Auto: San Andreas and Grand Theft Auto: Liberty City Stories, the drink is named with a primate-related pun, this time referencing both the Orangutan's name and a "Tang" which refers to something of a sour, acidic or citrus taste.

The name is also a reference to two real-life orange drinks: the American-made Tang and the British-made Tango.

Orang-O-Tang is most likely based on either Fanta or Tango. 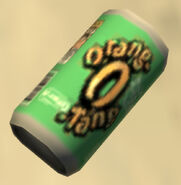 A discarded Orang-O-Tang can from a vending machine in GTA IV.

Bottles and cans of Orang-O-Tang in GTA V. 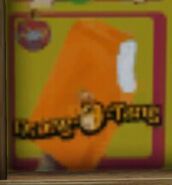 A Orang-O-Tang Advertisement in GTA V.