Yes
Not to be confused with Oracle XS, formerly called "Oracle".
“A fantastic piece of German engineering. So much that an oil change will cost you $500 at the dealership.”
— Southern San Andreas Super Autos description.

The design of the Oracle draws on the aggressive German styling featured on the BMW M6 Gran Coupe for the overall styling. The long wheelbase, greenhouse profile and rare chrome trim have been inspired from the larger BMW 7 Series F01/F02. The main body line, wheel arches, rear bumper and transition from C pillar to third box area have been inspired by the F01. The rear lights are mostly inspired by the BMW 5 Series GT's, but the overall rear profile also strikes a resemblance to the fourth generation Lexus GS, sixth generation Hyundai Sonata, Acura RLX, third generation Kia Optima/K5 and Infiniti Q50 sedans. The front fascia also bears a resemblance to the Infiniti Q50 but is likely designed more after the BMW 6 Series (F06/F12/F13), with headlamps from the BMW 3 Series F30. The car's overall body shape is classed as a Coupé in the game, similar to the present-day Gran Coupé body styling found on some modern-day BMWs.

The car's front fascia is made up of meshed intakes on the bumper, with the outer ones housing modern LED strips above. The number plate is mounted centrally and almost in front of the central intake. A trapezium-shaped grille finished in chrome is located on the centre, bearing five horizontal dividers over the mesh pattern. The front lights are rather curved at the bottom and consist of dual lamps, as well as L-shaped signals on the top edges of the outer lamps. The bonnet lines are clearly defined from either side of the grille and reach towards the base of the A pillars, along with smoother lines on the inner area. A manufacturer emblem is mounted on the front end, just above the grille.

The side of the car displays a very long profile and features very smooth sides. The wheelbase of the car, much like many luxury vehicles, is relatively long. The wheel arches are flared but with a smooth transition from the main body area. The lower body and upper body are split by a long main body line that covers the entire length of the car and coincides with the rear lights. At the base of the A pillar, small wing mirrors are mounted. The greenhouse section is bounded by smooth lines, and the C pillars present a smooth transition into the third box of the car's body.

At the center-top area of the car's rear fascia, a manufacturer emblem is mounted. Not far beneath the emblem is a horizontal chrome strip spanning half the car's width, whose top edge coincides with the top edge of the rear lights. The rear lights are dominantly red units. The number plate is mounted centrally between the two units. The rear bumper has a top edge that is impressed for the central two-thirds of its width. A single chrome strip is placed on the middle section of the bumper, with two reverse lamp units beside it. The base of the rear bumper features a wide vented section spanning about half the car's width and two single exhaust tips, one close to either edge.

In the enhanced version, the car shares the same interior as its older counterpart, being the same as the one used on cars such the Schafter and the Tailgater.

The car usually spawns in a variety of single-tone colours. However, when taken to a mod shop, it is revealed that the primary is applied on the bodywork, mirror wings and interior stitching, while the secondary is applied on the bonnet, roof panel and boot lid. The car is equipped with split five-spoke wheels that are wrapped in low-profile tyres.

The Oracle is much sportier than its predecessor, the Oracle XS. This sedan moves rather swiftly and is powered by a smoother-timed engine when compared to the XS, which sports a larger, more aggressive engine. Cornering is an improvement over its predecessor, and braking is impressive. The Oracle is a large, heavy saloon, yet the handling is well balanced and the overall speed is exceptional for such a car. It has better acceleration than the Felon, yet a slightly lower top speed.

The engine sound appears to be similar to the one from its older counterpart, though with a smoother tone.

A comparison between the two generations of the car, side by side.

A black Oracle used by Wei Cheng's men during Bury the Hatchet. 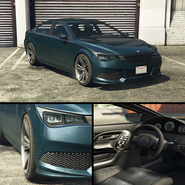 The Oracle on the updated Rockstar Games Social Club.

The Oracle in the cinematic preview on Rockstar Games Social Club.