Standard White - 100%
“The Oppressor Mk I was a landmark in hybrid vehicle design. Well, the Mk II takes off where its little brother landed - and it never comes down. This is about the closest you can get to throwing a saddle on a rocket engine, bolting on some optional heavy artillery, and pressing the big red button.

Please note: This vehicle can only be modified at the Specialized Workshop inside a Terrorbyte.

The Pegassi Oppressor Mk II is a custom hoverbike featured in Grand Theft Auto Online as part of the After Hours update, released on August 14th, 2018, during the The Black Madonna Residency Week event.

The vehicle is essentially an upgraded version of the Oppressor, replacing the land/glider characteristics of the original with the ability to hover. It appears to take influences from the hover bike from the movie Looper, given the motorcycle chassis mounted over a large turbine engine.

Compared to the regular version, the vehicle has wings that extend when in flight mode and prop stands to land, along with four vectoring nozzles on either side in a similar way to the Hydra, but they automatically tilt forward or backwards depending of the direction the vehicle is moving, or remain facing down when stationary. It also has an additional turbine below the front fairing intended for pitch movements and small thrusters on the side triangular panels intended for the turning characteristics, emitting a blue glowing effect similar to the rear thrusters of the Deluxo. The upper area of the bike is mostly identical in design and features to the regular version, with the exception of an extended rear fairing, where the same rocket booster is located.

The vehicle is armed with two machine guns located within the front fairing, just beside the headlamp. It can also be modified with either two small gatling guns with explosive ammo or four missile launchers.

The Oppressor Mk II has similar characteristics to the Deluxo, given the permanent hovering capabilities.

In hover mode, the vehicle handles like a normal motorbike and has a maximum speed of about 130 mph, but can perform stationary turns and can practically travel over any terrain, although caution should be taken with steep inclines or obstacles such as walls, traffic lights or trees, as it has a tendency to tilt backwards to attempt climbing the obstacle, thus dismounting the player in the process. It can also travel over water and remain safe even on huge waves during stormy weather, but unlike the Deluxo, it only hovers on the water when the engine is on. Although safety measures prevent the bike from touching the water, it won't be enough if the player tilts the bike forward, thus sinking the vehicle in the water and destroying it in the process.

In flying mode, the bike's top speed is limited to about 110 mph, but the mode allows it to reach areas which most aircraft struggle to, on par with the Thruster. Similar to the Deluxo, switching to flying mode is done by pulling up the stick to unfold the wings and reaching about 3 ft height. By pressing the handbrake button, the vehicle's wings will retract and rapidly decreases altitude, being a faster way to get down to the ground/sea level without having to move around and tilt downward. When halted in mid-air, the vehicle will begin to descend over time. It should be noted that the only way to exit the vehicle in mid-air is while it is moving, either forwards or backwards, which causes the character to dive off. If a player attempts to exit at a standstill, the vehicle will slowly descend to the ground before the character dismounts; once begun, the player cannot cancel this action.

The vehicle is powered by a turbine engine that is apparently connected to the parallel-twin engine seen on the regular version. It emits a rather quiet noise.

The bike is equipped with a rear-mounted rocket booster, which can be used as a brief speed boost on the ground or while airborne. The rocket propels the vehicle for a second and starts recharging upon braking the vehicle, similar to the KERS feature from the Lectro and the Vindicator. The rocket boost has little to no effect on top speed, but it helps significantly with gaining speed, as it alone is capable to boost the vehicle to 135 mph for a short time.

The Oppressor Mk II can only be modified at the specialized workshop inside a Terrorbyte.

When purchased, the Oppressor Mk II comes painted in the following colors by default:

An Oppressor Mk II with the Explosive MG upgrade.

An Oppressor Mk II with the Homing Missiles upgrade. 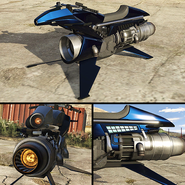 The Oppressor Mk II in the cinematic preview on Rockstar Games Social Club.

An Oppressor Mk II inside the Specialized Workshop of Terrorbyte.

An Oppressor Mk II with a Blue Tartan livery.

The Menacer and the Oppressor Mk II with the Santo Capra Coins livery. 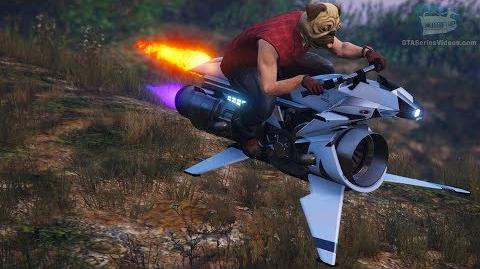