View source
watch 01:09
GTA Lore: Oppressor
Do you like this video?
Play Sound

Standard White - 100%
“There are two kinds of people in the point one percent. There's the balding stock analyst with pituitary issues, staring out the window of his comfortable private jet on the approach into LSIA. And there's the guy mooning him as he screams past on a rocket-powered hyperbike with extendable wings and a front-mounted machine gun. The only question is, which side of the glass do you want to be on?”
— Warstock Cache & Carry description.

The Pegassi Oppressor is a custom sports bike featured in Grand Theft Auto Online as part of the Gunrunning update.

The Oppressor is mainly based on the bike from Street Hawk (a modified Honda XR 500 motorcycle), with minor styling cues from the ENV.

The bike assumes a lightweight and aerodynamic design, featuring painted fork legs with silver/chrome tubes, as well as a triangular fairing with a hexagon-shaped headlamp on the front end and a small windscreen above. The same fairing also holds a small dial cluster with a digital display and small analogue gauges below, while a large handlebar is mounted on a black/plastic support and has additional buttons/switches on the left.

The main body of the bike has bulky sections continuing from the front fairing, which have small vents and two small wings, followed by a small fuel tank and the gray leather seat. The engine bay is mostly covered by a lower fairing and has two long exhaust tubes, coming from each cylinder block and running through the main body, just below the fuel tank and seat.

The rear of the bike is occupied by an elevated rear fairing that houses a small rocket booster, while large triangular panels are seen below the exhaust tubes, mounting the two large wings and the foot pegs for the rider. The rear wheel is supported by a dual swing-arm that is supported by a single suspension shock/spring, having the corresponding chain drive and sprocket on the left side.

The vehicle is armed with two machine guns located within the front fairing, just beside the headlamp. It can also be modified with four missile launchers.

The Oppressor's speed is impeccable. While performing similarly to other sport bikes, the Oppressor is slightly quicker and responsive.

Its most distinctive feature are the four wings that can be extended, allowing it to glide and maintain altitude for a limited time on a jump or ledge. The player has to use the wings wisely, as the bike has a tendency to become airborne on uneven terrain. With proper manoeuvring and gliding, however, one can cover long distances and reach areas which most vehicles usually cannot, such as the top of buildings. Care should be taken with the environment, as players may go past the desired landing zone and end up getting stuck or going into water, effectively destroying the vehicle. Players also have to be careful with obstacles such as traffic lights or trees, as one can easily be dismounted from the vehicle and end up being killed by falling to the ground.

The bike is powered by a parallel-twin engine that is coupled to a 5-speed gearbox, and shares the high-revving sound from sports bikes such as the Akuma and the Lectro.

Installing the "Saber Fairing" modification will increase its traction slightly, in the same way as a spoiler.

The bike is equipped with a rear-mounted rocket booster, which can be used as a brief speed boost on the ground or while airborne. The rocket propels the vehicle for a second and starts recharging instantly upon landing, finishing in an estimate of three seconds. This can be used in conjunction with the wings for immediate take-off, or used once to regain airspeed.

The Oppressor can only be modified at the vehicle workshop inside a Mobile Operations Center or Avenger.

When purchased, the Oppressor comes painted in the following colors by default:

Bikes exiting a Cargo Plane in the Gunrunning official trailer.

The Oppressors with the Missiles option during the mission Work Dispute.

An Oppressor with the "Tartan" livery.

An Oppressor with the "Blue and Green Camo" livery.

An Oppressor in the air and using the rocket boost.

An Oppressor with the Missiles upgrade (Rear quarter view) 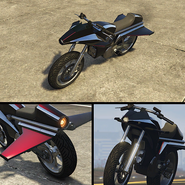 The Oppressor on Warstock Cache & Carry.

The Oppressor on the updated Rockstar Games Social Club.

The Oppressor in the cinematic preview on Rockstar Games Social Club.