The Opium Nights in Liberty City is just across the road from The Libertonian and it is mentioned several times. It is believed that Harvey Noto, the Don of the Messina Family, met his consigliere Harry Hall through a high class prostitution ring he ran in this hotel.

Claude Wome once rented all the rooms out in this hotel so he could go to breakfast naked.

Jill Von Crastenburg was videotaped giving oral sex to a valet at Opium Nights. It made the rounds on electrictit.com, but was soon taken down by site admins. It's is apparently shot in night vision, similar to Paris Hilton's sex tape '1 Night in Paris'. According to the comments on the video, Von Crastenburg was sending a text message the entire time, and that she was also only 13 at the time the video was shot, making it child pornography.

The Opium Nights in Los Santos is a 14-story, four-stars hotel located on Greenwich Parkway and Exceptionalists Way in the LSIA district of Los Santos. Adjacent to the building, there is the Poppy House Restaurant. It could be based on the Sheraton Gateway Hotel in Los Angeles, since it shares a similar structure and is also located near the airport. 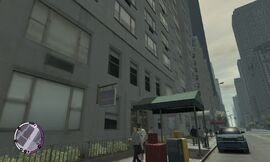 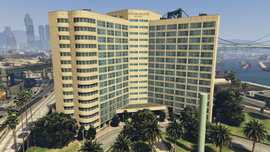 Retrieved from "https://gta.fandom.com/wiki/Opium_Nights?oldid=1133912"
Community content is available under CC-BY-SA unless otherwise noted.