"The future of competitive motorsport has arrived, and it’s in a hurry. Two brand new open-wheel ultra-performance vehicles. Seven high-speed tracks. Dozens of split-second decisions, from the tires you use, to whether you take that all-important pit stop. And above all: one seat, one driver, one grand prize."
―Rockstar Newswire description.

San Andreas Prix Open Wheel Races are a series of Land Races featured in Grand Theft Auto Online as part of the continuation of The Diamond Casino Heist update, released on February 27, 2020, during the Open Wheel Races Week event.

Players can choose any vehicle in the Open Wheel vehicle category. There is also an option to select three types of tyres: Soft, Medium or Hard. Soft tyres offer more grip, but have lower duration, while Hard tyres have less grip, but offer more duration. Medium is basically the middle line of the aforementioned tyres. Tyre selection is crucial for the general layout of a race. Despite various wing setups giving different performance characteristics in Freeroam, all vehicles in these races perform exactly the same regardless of which wings the player has installed on their car.

Open Wheel Races have a Pit stop that allows the regeneration of the vehicle and tyre "health", thus repairing the vehicle completely and avoiding getting the car's tyres deflated.

Nine additional Open Wheel Races were added to the game as part of the Los Santos Summer Special update. The start countdown and sounds for hitting checkpoints were changed to make the races more unique. The vehicle and tyre health, which were originally indicated by two bars on the bottom left of the screen, are now shown with a small image of an Open Wheel car next to the radar. As parts get damaged, their colour will start changing to yellow, orange, and finally, red.

There are seven races. These are listed in the "Races" list, with the "Open Wheel" prefix.

Added as part of the Los Santos Summer Special update: 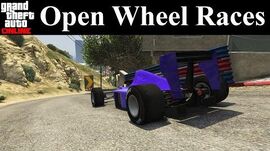 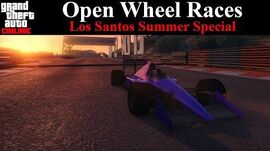 Retrieved from "https://gta.fandom.com/wiki/Open_Wheel_Races?oldid=1262344"
Community content is available under CC-BY-SA unless otherwise noted.