That Special Someone
Diamonds Are a Girl's Best Friend

If the Price is Right ("Deal")

In-game time
“You get close to your dream, then something holds you back. No! Well, Commission or no Commission, I ain't gonna starve. People don't want me around, they don't have to have me. But I know how to earn. I need a favor.”
— Jimmy Pegorino, to Niko Bellic

One Last Thing is the final mission given to Niko Bellic by Jimmy Pegorino in Grand Theft Auto IV.

After the cutscene and two post-mission phone calls, the player must determine which ending to choose.

In order to complete the mission (after making two post-mission phone calls), the player must:

After killing/sparing Darko Brevic in the last mission, Jimmy Pegorino contacts Niko and explains that he needs to talk to Niko. Pegorino asks Niko to meet him at the the strip club in Tudor, Alderney.

Niko arrives and orders a drink at the bar. Pegorino walks up to him and explains that he is ordering Niko to do a heroin deal with Dimitri Rascalov. Niko is reluctant to work with Rascalov again due to Rascalov's earlier betrayal of Niko, but Pegorino orders Niko to meet Phil Bell at his apartment to do the deal.

Niko leaves the strip club, and phones Roman to explain the situation. Roman tells Niko he knows all about the deal and also knows where Rascalov is. Niko realises that now he can now kill Rascalov and forget about the deal. Roman begs against this and thinks Niko should leave his life of violence behind and do the deal, with Roman planning to use the money to pay for his and Mallorie's honeymoon and buy a private jet to take himself and Niko to Vice City. Niko then phones Kate McReary, who advises Niko not to do the deal, as she doesn't think Niko should sacrifice his principles for money or take his chances with Rascalov. 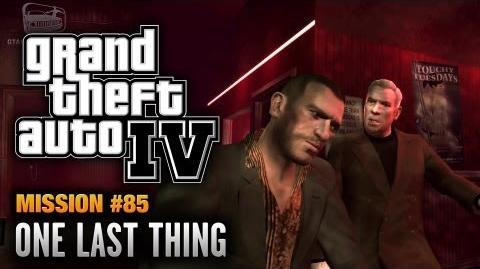