In-game time
“Surveillance on our latest shipment of slot machines has picked up some pretty shifty guys taking an interest. Might be nothing, but just in case, could you go and do the pick up? Best go prepared.”
— Agatha Baker's briefing.
“We have an incoming shipment of slot machines down at the docks. I'd send the usual courier, but we've had some reports of suspicious activity in the area. Can you confirm the serial number, deliver the machines, and deal with any mess?”
— Alternative briefing.

One Armed Bandits is a Casino Work mission featured in Grand Theft Auto Online as part of the The Diamond Casino & Resort update. It is a freeroam mission given to the player by Agatha Baker.

Ms. Baker informs the protagonist of a new shipment of slot machines for the casino at Terminal. She says there is some suspicious activity nearby and if they could go there and deliver the shipment themselves.

The player is tasked with going to Terminal. Once they arrive, ten containers will show up on the map as blue container icons, in semi-random locations. Only one of these containers is carrying the slot machines and it must be found. The area is being patrolled by numerous enemies on foot and in Caracaras. The player can choose to complete the mission stealthily.

Once the player is near a container, its icon will disappear from the map if it is an incorrect one. When the container carrying the slot machines is found, its map icon will turn green and the player is instructed to take a photo of the code printed on it and send it to Ms. Baker. The code itself is not always the same, but it is always two letters and two numbers. When the code has been sent to Agatha, she will call the protagonist to inform them that their delivery helicopter has been sabotaged, and that they should find and steal another helicopter.

“That's the one. Bad news though, our cartel friends did their homework and sabotaged our delivery helicopter. They must have one of their own nearby, quickest way out of this mess is to find it and use it.”
— Ms. Baker

The Skylift is located at the southwest part of Terminal and is guarded by four enemies - if enemies have not been alerted to this point. Once the player steals the helicopter, they must collect the container and deliver it to the casino, after which Ms. Baker calls them to end the mission.

“Beautiful. Do whatever you want with the chopper, okay?”
— Ms. Baker
“Thanks. And nice flying.”
— Alternative call

“You're looking for a container with "[CODE]" printed on it. Send me a picture of the whole code and I'll confirm.”
— Shortly after arriving at Terminal.

Rather than sending the photo to Ms. Baker, the player can send it to a select few other contacts to receive a reply unique to each of the characters:

“Interesting...”
— Agent 14
“Urm, okay... You got a new arena contender in there or something?”
— Bryony
“What the fuck is this bro?!”
— Brucie
“You losing ya marbles geez? Wotcha sending me this for??”
— English Dave
“Cool...”
— Gerald
“Eh, I don't think this was meant for LD, am I right?”
— Lamar Davis
“Ooooh a container, please tell me there's a celebrity in there!!”
— Lazlow
“A container? You looking to branch into the shipping business?”
— Ron Jakowski
“I don't remember asking for photos of a container, unless it contains a car I'm after. Stop wasting my time.”
— Simeon
“What a lovely container. Is there a new DJ in there?”
— Tony Prince 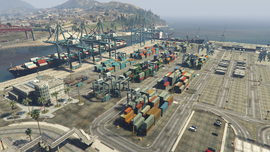 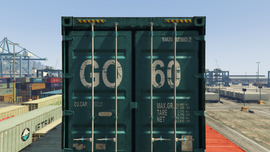 The code on the containers. 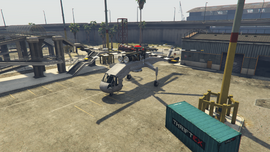 The Skylift that must be stolen.