On the List is a mission in Grand Theft Auto Online given to the player by Martin Madrazo. It is available for 1-4 players. This mission was one of eight[1] new contact missions added in The High Life Update.

Martin has a list of five targets he wants the players to assassinate for him. When starting the mission, the Player will spawn near the Kortz Center and be given two Jackal's or a Bati 801 to use. At the start of the mission, only four will appear on the map, which the team has ten real-time minutes to kill, in any order they wish. The target locations are as follows:

One is in a Dune Buggy at the start of the Arthur's Pass Trails.

One is working on a billboard on Hawick Avenue.

One is riding a Bati 801 around Pillbox Hill in Downtown LS.

One is in an alleyway with other Ballas members on Carson Avenue in Chamberlain Hills.

The last target is driving away from the Puerto Del Sol Marina in La Puerta in a Jetmax with other Khangpae members.

Once the first four have been killed, Martin will text the players the location of the fifth and final assassination target. The players have five real-time minutes from when the last target was killed. Once this target is killed, the mission is complete. The fifth target will spawn at the beginning of the mission and can be killed at any time but must be left until last otherwise the mission will end in failure once the last of the original four are killed. 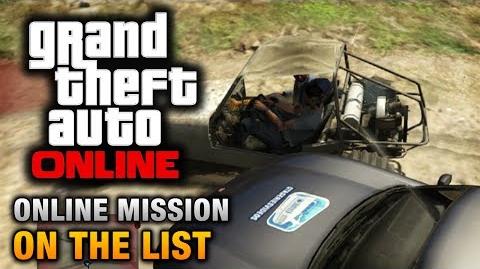