GTA Wiki
Register
Don't have an account?
Sign In
Advertisement
in: Articles with sections under construction, Exclusive Enhanced Version Content in GTA Online, Vehicles,
and 6 more

20
“Take a moment for mindfulness. Time to breathe, to reflect, to appreciate life's little joys. Like two AC synchronous electric motors and all-wheel drive. Or why not an optional Missile Lock-On Jammer, Remote Control Unit, Slick Mines, and Armor Plating? Just remember, it's not the number of breaths you take, but the number of mods that take your breath away ... #blessed”
— Legendary Motorsport description.

The Obey Omnis e-GT is an electric sports saloon featured in The Criminal Enterprises update for Grand Theft Auto Online.

The vehicle assumes a sporty design similar to the Raiden and the Neon, where the front end features a small CFRP extender/splitter at the bottom, with a narrow intake on the centre that spans about half the car's width. On the upper area, the central portion is surrounded by a black detail and features a split lower grille, a painted section with the number plate and an upper grille with a plastic detail, while the portions beside the black separation have large arrow-shaped intakes and smaller ducts with a CFRP detail. Beside the upper grille, there are modern headlamps consisting of small LED-like main units on the lower side and modern strips above, together with indicators on top. The front boot has an impressed area win an elevated section on the centre and the manufacturer logo on the front end, which opens to reveal a small luggage compartment finished in black.

On the sides, the car features exit vents on the front fenders, distinctive lines angled slightly upwards towards the rear and flared rear arches, along with black side skirts and numerous formations above, consisting of flat lines passing through the door handles and curved ones over the wheel arches, reaching towards both ends but leaving a small gap on the middle. The glasshouse area makes use of painted mirror shells with black supports on the front, a black/plastic finish for the trims around the windows and the inner pillars, while the roof panel is separated by two black/plastic trims. The rear area features a small boot lid with a black/plastic panel adjacent to the rear window and a an active aero rear wing that is activated at moderate speeds, in a similar way to cars like the Comet S2 and its convertible variant.

On the rear end, the boot lid bears the manufacturer logo on the upper area, a black section on the middle section and the central number plate with the silver "OBEY" lettering at the bottom. The car houses upper main/brake lamps and lower indicators on the outer edges, while the boot lid houses the narrow third brake lamp and small reverse lamps beside the aforementioned indicators. The rear bumper houses a large diffuser with a narrow exit vent above and a larger central vent below. The underside is mostly generic, albeit featuring black panellings on the middle.

Most of the bodywork is painted with the primary colour, while the mirror shells and the interior stitching are painted with the secondary colour. The rims appear to be a variation of the "Ice Storm" Track rims available in Los Santos Customs, but most of the rim is finished in black and lacks the rivet details on the outer portion.

The Omnis e-GT’s acceleration is great for a sports electric vehicle, reaching 60/MPH in two or three seconds. However, like other electric vehicles, its top speed is underwhelming, only reaching 111.5/MPH.

The Omnis e-GT, in the other hand, is quite heavy for a sports car, as it can ram through traffic only losing some speed. Due to its weight, it has poor braking capabilities, and can likely spin out when crashing into traffic obstacles. At high speeds, the Omnis e-GT handles rather unresponsive, and it suffers from little oversteer.

The Omnis e-GT is stated to be powered by two electric motors, powering all wheels. It has the same electric sound from other similar vehicles, such as the Voltic and the Neon.

The Omnis e-GT, along with the Greenwood and selected vehicles from The Contract update, can be modified with a Remote Control Unit, which allows the ability to drive the vehicle remotely, similar to the RC Bandito and the Invade and Persuade Tank. Note that this feature cannot be kept if the Missile Lock-on Jammer is installed, and that the camera is always set to first-person view.

When the Armor Plating upgrade is equipped, the vehicle adds armour padding on the sides in a similar manner to the armoured vehicles featured in the Executives and Other Criminals update. However, it gives even higher resistance to explosives than the Greenwood and the Imani tech vehicles from The Contract update, resisting 11 RPGs, 11 missiles, and 29 Heavy Sniper MK II Explosive rounds (The amount of explosives is halved if not occupied or remote controlled by a player). Unlike the vehicles from The Contract update, it lacks bulletproof windows, but it does not appear with a unique radar blip (features also present on the Greenwood).

The Omnis e-GT, along with the Greenwood and selected vehicles from The Contract update, can be modified with a Missile Lock-on Jammer, which prevents the lock-on system of the Homing Launcher and other weaponised vehicles to target onto it. Note that it cannot be kept if the Remote Control Unit is installed.

The vehicle has the option to install Slick Proximity Mines (green flashing light), which burst a large amount of oil on the surface, causing vehicles passing over it to lose control. This deals no damage to both vehicles or players.

The vehicle can be customized in Los Santos Customs and other mod shops, although special upgrades (tagged with

) are only available at the vehicle workshop inside Agencies. 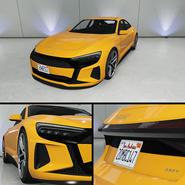 The Omnis e-GT on Legendary Motorsport.

The Omnis e-GT in the cinematic preview on Rockstar Games Social Club.